The Delhi Police had arrested Indian paceman Sreesanth and other two cricketers Ajit Chandila and Ankeet Chavan on charges of spot fixing during IPL in 2013.

The Supreme Court today asked the Delhi High Court to decide by July end the appeal challenging a trial court order discharging several cricketers, including S Sreesanth, in the sensational IPL spot-fixing case. Sreesanth, who has been awarded life ban by the Board of Control for Cricket in India (BCCI), has filed an appeal in the apex court challenging the Kerala High Court decision upholding the ban on him.

A bench headed by Chief Justice Dipak Misra said it understood the “anxiety” of the cricketer to play cricket but would like to wait for the high court’s decision on the appeal of Delhi Police challenging the trial court order discharging the cricketers and others in the IPL spot-fixing case. Sreesanth has sought an interim direction that he should be allowed to play the English County cricket in the view of the fact that he has already been discharged in the IPL spot-fixing case and has been suffering the ban for the past four years.

The Delhi Police had arrested Indian paceman Sreesanth and other two cricketers Ajit Chandila and Ankeet Chavan on charges of spot fixing during IPL in 2013. A single-judge bench of Kerala High Court had on August 7 last year lifted the life-ban imposed on 34-year-old Sreesanth by the BCCI and set aside all proceedings against him initiated by the board.

A division bench of the high court had later restored the ban on a petition filed by the Board of Control for Cricket in India (BCCI) against the single-judge bench’s order. All the 36 accused in the spot-fixing case, including Sreesanth, Chavan and Chandila, were let off by a Patiala House court in July, 2015.

The BCCI, however, had refused to alter its disciplinary decision even after the verdict. 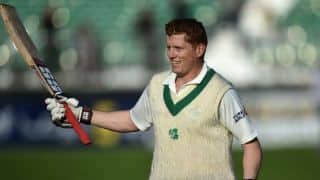 Pakistan vs Ireland, 1st Test, Day 5 2018 Live Streaming, Live Coverage on Sony SIX: When and Where to Watch