There was no 100th international century for Sachin Tendulkar, but his scratchy 85 proved the impetus for India to seal their place in the 2011 World Cup final against Sri Lanka in Mumbai. 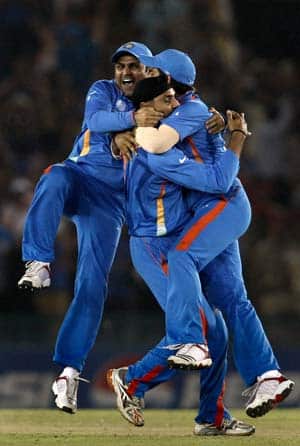 There was no 100th international century for Sachin Tendulkar, but his scratchy 85 proved the impetus for India to seal their place in the 2011 World Cup final against Sri Lanka in Mumbai. Relieved twice by the third umpire on 23 and dropped on 27, 45, 70 and 81 Tendulkar lived a charmed life as Pakistan rallied through Wahab Riaz to keep India to 260.

That seemed disappointing after the start India had gotten on a flat track, but Pakistan s quixotic approach to chasing under lights ultimately helped India extend their World Cup record against their arch-rivals to 5-0. Pakistan s veterans Younis Khan and Misbah-ul-Haq had contributed to four lives given to Tendulkar during the afternoon, and when the sun set their go-slow tactics put pressure on the younger players as India s bowlers tightened the screws.

Having opted to bat, India got off the blocks frenetically with Virender Sehwag slamming 33 off his 38 runs of a decidedly off-colour Umar Gul. Eight of Sehwag s nine fours came off Gul five in one over and Pakistan s spearhead was left to nurse figures of 41 from his first four overs. It was Riaz who delivered the balm when he trapped Sehwag lbw for 38 off 25 balls.

Tendulkar cut and drove Riaz for fours, but then shifted tones when spin came on. With the pitch affording the slow bowlers some drift, Tendulkar was in all sorts of trouble. Immediately his drives and flicks lost flourish as spin pulled matters back for Pakistan. On 23, Tendulkar had an lbw verdict reversed and a stumping appeal go upstairs. On 27, he was dropped at mid-wicket when he pulled a low catch to Misbah-ul-Haq. Moments after Mohammad Hafeez lured Gautam Gambhir out of his crease, Tendulkar was spilled by Younis Khan at cover. Shahid Afridi looked on ruefully, while Tendulkar hung his head and retook guard.

A lofted cover drive brought him fifty and Tendulkar looked a relieved man. The flashy drives were missing, the aggressive punches nowhere to be seen, but the quick running between the wickets and deft touches were very much in evidence. Afridi was steered to third man and Gul was glanced to fine-leg.

Seeking a breakthrough, Afridi called on Riaz who got Virat Kohli to steer to point and splayed Yuvraj Singh s stumps first ball with a nasty inswinger. The elation made way for more frustration as Kamran Akmal dropped a thick outside edge and Umar Akmal muffed a chance at mid-on. Eventually Afridi held a catch at short cover and Tendulkar was one his way.

The Indian innings got a bit shaky at this stage and it needed Suresh Raina s cool head to manipulate the total to 260, though that was not what India would have had in mind at the outset. Riaz finished off a great display of left-arm pace by adding MS Dhoni and Zaheer Khan to finish with a career-best five for 46 in a World Cup semi-final.

On a dry pitch that slowed down with every passing over in the second half, Pakistan s openers put on 44 before the first wicket fell, Kamran Akmal slapping Zaheer Khan to Yuvraj at point. Hafeez, who had contributed 25 to that alliance, continued to play some sturdy shots but needlessly attempted a paddle, on 43, to a ball well outside off and was caught behind off Munaf Patel.

From here, Pakistan s innings lost steam. Younis couldn t time a ball and this added pressure on Asad Shafiq. Shafiq played well for his 30, cutting and driving with fluency, but looking to accelerate he exposed his stumps and was bowled by Yuvraj. Younis awful inning ended soon after when he spooned Yuvraj to cover; he had scratched around 32 balls for 13.

Much rested on Umar Akmal s shoulders and he briefly threatened to take the match away from India, targeting Yuvraj s left-arm spin. He literally toyed with Yuvraj, using his feet to loft four and then forcing him to drag it short, only to rock back and pull a flat six. Umar s punchy innings came to an end when Harbhajan Singh returned and pegged his off stump back with an arm ball.

By now India had wrested control back, and with a lethargic Misbah unable to force the pace, Munaf and Ashish Nehra stemmed the flow of runs. Munaf picked up a second when Adbul Razzaq played down the wrong line to a clever slower ball. Misbah s strokeless approach put pressure on Afridi to lift the mood but he sliced a full toss from Harbhajan to extra cover, at which time the Indian dressing room rose in unison. The game, they knew, was officially over.

As wickets fell Misbah plodded along to a fifty without really bothering India. A few aggressive shots left Pakistan needing 30 from six balls, and though the elusive tenth wicket finally came when Misbah slogged to long-on.