Rohit Sharma scored 162 off 137, his second hundred of the ongoing series against West Indies

Trust Rohit Sharma to score big hundreds in ODIs. The record speaks for itself. He has seven 150-plus scores in his ODI career so far with Brabourne Stadium, his home ground, witnessing one of those majestic knocks on Monday. Rohit scored 162 off 137, his second hundred of the ongoing series against West Indies and 21st century of ODI career to power India to a massive total.

India went on to win by 224 runs to take 2-1 lead in the five-match series with a game to go. Rohit had set the tone with the first ball of the India innings as he struck a four to set the ball rolling. However, respecting the conditions which, in his words were favourable to both batsmen and bowlers, he took his time to settle in.

His first fifty came in 60 deliveries, his next off 28 deliveries and the third in 33 deliveries. A typical Rohit hundred. While he was thrashing Windies bowlers, the prospect of double-century took shape. Rohit has three of them already and a fourth didn’t look far ahead.

However, a lazy shot ended the hopes. But, Rohit had once again shown his class.

“Not double-hundred,” Rohit replied when asked whether he was thinking of getting the milestone. “I was thinking of scoring as many runs as possible. I don’t think about getting hundreds or 200s. I just want to go bat and score runs and get the team into good positions. The three double-hundreds that I have got, I never thought about getting them.”

India had lost Shikhar Dhawan and Virat Kohli by the 17th over, Rohit and Ambati Rayudu then combined for a 211-run partnership for the third wicket. Rohit said it was his batting partner who reminded him of the potential milestone. “In fact, Rayudu was telling me that I can get a double-hundred but I was trying to just focus on batting and not thinking about how I am going to get to double-hundred. I wanted to make sure we get enough runs because Cricket Club of India (CCI) can be tricky in terms of chasing. We bowled really well to get them out. But it never crossed my mind,” he said.

Brabourne is a happy-hunting ground for Rohit. It was here that he became the first Indian to hit a T20 century in 2007 against Gujarat and then scored his only triple century, against the same opposition in 2010.

Rohit said having played at the venue, he knows how the pitch will respond at certain period and the history he shares with the ground gave him confidence. “I have played a lot of cricket at CCI. I have always enjoyed batting here. Very good pitch, you get value for your shots, fast outfield. You don’t need to try and hit too hard. You need to find those gaps. That was something that I was trying to do.

“When you come to a ground where you have played enough cricket, you kid of feel confident going into the match and that probably was my mindset also before entering the field. I have played a lot of cricket here. I understand the nature of the pitch, what it does, what helps the spinners, when the ball turns. Those kind of things are important to understand. I have done well (here). It was just going about and doing the same routine what I do normally. I don’t want to rate any of my knock because all the runs that I score for India are important,” he said.

India scored 377/5 and then their bowlers took centrestage. Khaleel Ahmed and Kuldeep Yadav shared six wickets between them as Windies were bowled out for 153 in 36.2 overs. Rohit said spending time on the pitch was crucial to score runs and it was a sporting pitch which had a little bit of help for both batsmen and bowlers alike.

“There was some swing. There was seam movement as well. Once you are set, it’s a batsman’s paradise. As you see, in the first innings, when me and Shikhar were batting, we weren’t not finding it (batting) that easy because it (ball) was doing a little bit. You can’t just straightaway start playing shots. You need to spend some time. In my opinion, the pitch offered both batsmen and bowlers. So, I think, it was probably one of the best pitches that I have played in India,” the 31-year-old said. 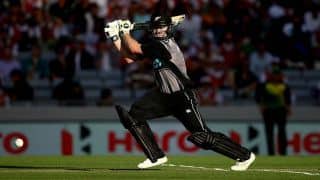