The winner of this match will face Afghanistan in the Desert T20 2017 final.

Scotland take on Ireland in the second semi-final of the Desert T20 Challenge 2017, at Dubai International Cricket Stadium. The live cricket streaming of the match is available on skysports.com, while the live telecast will be available on Sky Sports Network. Scotland have been unbeaten in this tournament, having won all their three games and topping Group B. Ireland, on the other hand, have lost two out of their three matches and finished Group A just behind Afghanistan. The winner of this match will go on to play the winner of the first semi-final in the final of the competition. The two semi-finals and the finals will be played today at the same venue.

Ireland suffered their first and only blow in the competition when they were beaten by Ireland in their first match. After that, they have notched up wins against Namibia and also the host nation United Arab Emirates (UAE). Scotland, who are one of the stronger sides in the competition, beat Hong Kong in their first game, following it up with wins against Netherlands and then against Oman. They have been dominant so far, and one would not best against them winning this one as well and moving on to the final.

This is the first ever edition of the Desert T20, where eight associate nations have come together in a tournament for the first time. The quality of cricket has been extremely good so far. With two more matches to go, one hopes that it lives up to the high expectations. 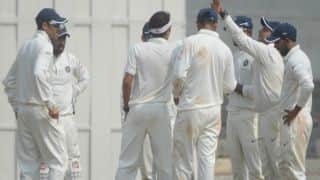