It was reported that the bird made more significant recovery than initially thought.

A seagull, which was strolling around the MCG during a clash between Melbourne Stars and Perth Scorchers during a Big Bash League (BBL) clash, became the focus of the crowd after being struck by a firmly struck pull-shot from Adam Voges. To everyone’s horror, the bird fell flat on the ground, showing no signs of movement.

Melbourne Stars’ Rob Quiney, who was close to the sight picked the bird to place it outside the play area, when, to the joy of the big crowd at MCG the injured bird struggled its way back to its feet, reported cricket.com.au. It was later reported that the bird made more significant recovery than initially thought.

“The bird was taken outside into Yarra Park at the change of innings and released into the park when it was clear that the bird’s health was okay,” Melbourne Cricket Club Media and Publicity Advisor Sarah Gordon reported to bigbash.com.au.

In the opinion of Melbourne Bird Veterinary Clinic avian vet Dr Colin Walker, the damage taken could have proven a lot more damaging. “You could be looking at just soft-tissue injury, it could be a fracture,” said Dr Walker.

“You could be looking at some internal injury (as well). Birds are fairly tough. Most things are repairable. If it was soft-tissue or internal, the fact that it’s still alive, would carry a pretty good prognosis,” he added.

The birds recovery inspired the 33,580-strong crowd into cheer. According to others, it even was the inspiration for the home-side to push themselves for victory as they were looking headed for a loss at that point.

“For all money it looked dead, Quiney went over and picked the bird up and put it on the other side of the rope. “To be honest the bird looked as dead as the Stars were at that stage. About ten minutes later the bird stood up, and the crowd went nuts. We looked at that and saw it as a sign, and so did the Stars,” said Eddie McGuire. 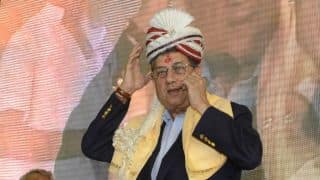 Supreme Court: BCCI may be private, but functions "public"