It appeared the Sean Abbott delivery hit Hughes on an area of his neck unprotected by his batting helmet.

Pakistan great Waqar Younis questioned whether Sean Abbott would continue in cricket after delivering the ball that led to the death on Thursday of Australian batsman Phillip Hughes.

The cricket world was united in grief after it was announced that Hughes, due to celebrate his 26th birthday this weekend, had died having failed to regain consciousness after being hit at the base of the skull trying to hook a bouncer from Abbott while batting for South Australia against New South Wales at the Sydney Cricket Ground on Tuesday.

It appeared the ball had hit Hughes on an area of his neck unprotected by his batting helmet.

“How will he [Abbott] continue?,” Waqar, one of the outstanding fast bowlers of his generation and now Pakistan’s coach, told AFP.  “He needs counselling, which I am sure must have started, and needs to stay calm,” he added.

But former England fast bowler David Lawrence said he feared Abbott may never player cricket again as a result of the tragedy. Lawrence is well-placed to understand Abbott’s situation having, as a 24-year-old Gloucestershire paceman, bowled the ball that hit West Indies’ batsman Phil Simmons — who wasn’t wearing a helmet — flush on the head in a tour match at Bristol, south-west England.

Simmons, now the coach of Ireland, went on to make a full recovery but only after his heart stopped and undergoing emergency brain surgery.

“He collapsed. They rushed him to hospital, and were able to save his life and take a blood clot off his brain — and he subsequently went on to play again,” Lawrence told BBC World News.

Lawrence said the fact he could talk to Simmons was a huge help and he wondered how Abbott would be able to continue bowling in the absence of such consolation.

“What gave me comfort was I was able to see Phil Simmons 48 hours after, and he was able to tell me it wasn’t my fault,” recalled the now 50-year-old Lawrence. “The bowler in this instance wouldn’t have been able to do that. Hughes didn’t make a recovery, wasn’t able to talk to him.

“So my thoughts go out to him as well — because whether he will come back from this or not, personally I don’t think he’ll play cricket again,” added Lawrence, whose Test career was cut short by an horrific knee injury he suffered while running in to bowl against New Zealand at Wellington in 1992.

As well as condolences for Hughes, there has also been widespread sympathy from among the global cricket community for Abbott, with former Australia fast bowler Jason Gillespie, now the coach of English county champions Yorkshire telling Sky Sports: “Abbott is a lovely young kid who was just running in and doing his job, bowling balls and it was one of the last things that he would have expected. “We are really feeling for him right now and everyone who was there.”

So far, there have been no calls from within cricket for bouncers to be banned and Lawrence was adamant they remained a legitimate tactic.

“I don’t think any fast bowler walks out there, looking to inflict danger on someone — or for them to end up in hospital, and lose their life,” he said.

“It’s a part of the game. You use it to ‘rough up’ a batsman, make him feel unsettled, and then you look possibly to pitch the ball up.  I wouldn’t like to see that taken away from the game.”

Lawrence’s view of the bouncer was supported by another ex-England paceman in Matthew Hoggard. “You bowl it to be intimidating, but you don’t bowl it to try and hurt people,” Hoggard said. “To bowl a ball that has resulted in somebody dying has got to be absolutely devastating.”

Hoggard added he hoped Abbott would continue his bowling career, saying: “There’s great things coming from him and a lot of people tipped him to play for Australia. “Hopefully he can get the support around him and find the strength to carry on. I’m sure Phil would have wanted it because it was a tragic accident.” 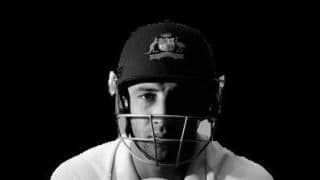 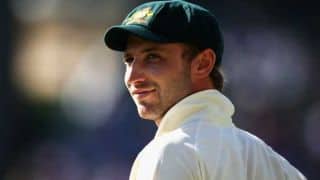