The din around the fact that it was the first-ever World Cup game to be played in Bangladesh turned into a hush soon enough and by the time the Indian innings had ended, it was silence. 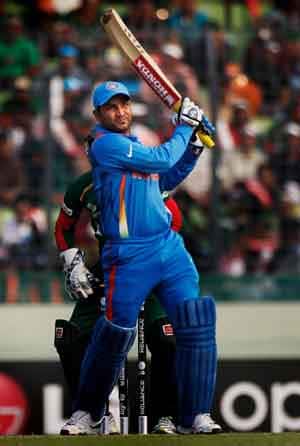 The din around the fact that it was the first-ever World Cup game to be played in Bangladesh turned into a hush soon enough and by the time the Indian innings had ended, it was silence.

The din around the fact that it was the first-ever World Cup game to be played in Bangladesh turned into a hush soon enough and by the time the Indian innings had ended, it was silence. Not quite the pin-drop one expects from Indian crowds at the loss of Sachin Tendulkar s wicket but there wasn t any doubt that the Mirpur audiences had been suitably stunned.

Winning the toss and electing to field against a rather-strong Indian batting was probably a decision that Shakib al Hasan will live to regret for the rest of his life especially if the side fails to get close to the target of 371. With the power of the hindsight, it was way off the mark.

Virender Sehwag, who had spoken about feeling the need to bat through the 50 overs of an ODI innings lived up to his word and smashed a superb 175 the home team were batted out in the first game of the cricket World Cup 2011. Sehwag fell short of batting through the innings by a couple of overs but by then, he had caused much more damage than the opposition would have expected him to.

Thirty two came off the first three overs, but the issues with the running between the wickets between Sehwag and Tendulkar came to the fore yet again. The result was a Tendulkar run out to nip a promising innings in the bud.

That brought Gautam Gambhir to the crease, and for a while it looked like he had decided to play a Sehwag-like innings. There was precision in his cut and chip shots alike and even without batting in too many Powerplay overs, he got to 39 off only 37 balls. Unfortunately for him, Gambhir s sublime innings was ended by an inside-edge on to the stumps off the bowling of Mahmudullah.

Virat Kohli joined Sehwag at this stage and the rest of the Indian innings was a blur. Kohli s maturity was matched by Sehwag s belligerence and captain Mahendra Singh Dhoni s astute decision to
take the batting Powerplay at the start of the 35th over. Sehwag had got to his second World Cup century only a couple of overs before that and the required momentum was obtained as 48 came off the five overs.

Kohli got to his 50 off only 46 balls while Sehwag, who had tasted blood by then, exploded to get to his 150. He took another 46 to get to 175 before Shakib got him to inside-edge the ball on to the stumps a second of such a dismissal and an indicator of how the track was anything but a flat-looking pitch. Sehwag walked away to a standing ovation and one got the feeling that despite missing his double-century, the ‘revenge that he was talking of before the game was complete.

By this time, enough damage had been done and with Kohli also getting to his century in 83 balls off the penultimate delivery, India ended on 370 for 4 in their 50 overs.