Dashing opener Virender Sehwag will fly to England to reinforce the embattled Indian team for the last two Tests, the Indian cricket board said on Tuesday. 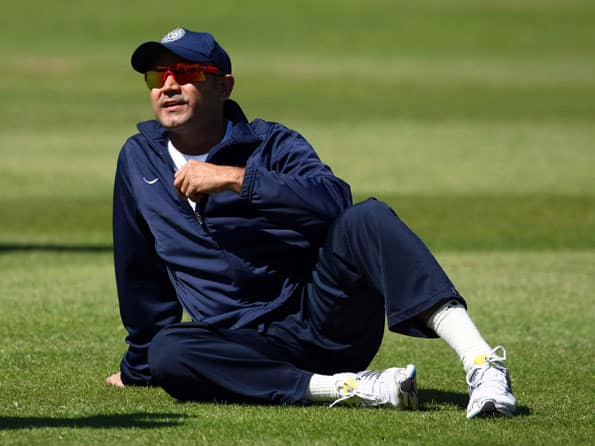 Virender Sehwag missed India’s tour of West Indies due to an injury in shoulder, which he picked up during the Indian Premier League (IPL) in May Getty Images

Dashing opener Virender Sehwag will fly to England to reinforce the embattled Indian team for the last two Tests, the Indian cricket board said on Tuesday.

Sehwag, 32, whose brilliant strokeplay has propelled India’s batting in the past, missed the previous series in the West Indies and the first two Tests in England because of shoulder surgery in May.

He was selected as the 17th member of the touring squad for England, but was allowed to join his team-mates a fortnight late.

Sehwag’s fitness will be tested during a two-day match against Northamptonshire from August 5 which precedes the remaining back-to-back Tests at Edgbaston and The Oval.

Sehwag’s return will boost India, who crashed to a humiliating 319-run defeat with a day to spare in the second Test at Trent Bridge on Monday to hand England a 2-0 lead in the four-match series.

The tourists, who lost the first Test by 196 runs, must now win at least one of the remaining two Tests and avoid defeat in the other to prevent England from taking over as the number one-ranked team.

Sehwag’s regular opening partner Gautam Gambhir, who missed the second Test with an elbow injury, is also expected to be fit for the third Test.

Sehwag has scored 7,694 runs in 87 Tests at an average of 53.43 with 22 three-figure knocks, including two triple centuries.