There is a section in BCCI which feels that Ajinkya Rahane's limited overs case has not been handled well by the selectors.

The Indian selection committee has its task cut out when it zeroes in on the replacement for Ambati Rayudu in the Indian One-Day squad for the three-match series against England. Meanwhile, Rohit Sharma, who had taken permission from the BCCI  to skip the Yo-Yo test on June 15, will appear for the same at the NCA tomorrow. Rohit had taken permission from BCCI for his personal engagements (he is in Russia as a brand ambassador of a watch company).

There’s no rule that all tests have to be conducted on the same day. He will be appearing for the Yo-Yo Test tomorrow, GM (cricket Operations) Saba Karim told PTI today. Rayudu’s Yo-Yo Test failure has come as a shock for many, especially after his successful IPL campaign (602 runs) with Chennai Super Kings. Rayudu scored a dismal 14 in the test while qualifying mark is 16.1.

It has been reliably learnt that team management and selection committee members are “still not on the same page” with regards to Rayudu’s possible replacement. At least five options are available to the selectors who are likely to take two-three days to make the announcement.

With MS Dhoni and Dinesh Karthik already in the squad, it will be interesting if a third wicketkeeper in Rishabh Pant gets a look in after a stupendous IPL.

There is a section in BCCI which feels that Ajinkya Rahane‘s limited overs case has not been handled well by the selectors and the current team management (skipper Virat Kohli and coach Ravi Shastri), a senior BCCI official said. If 100 percent fit, Kedar Jadhav is the unanimous choice but in case he can’t make it, then doors might just open for veteran Suresh Raina or rookie Krunal Pandya.

Raina, with an experience of over 200 ODI matches, possibly is the choice of the team management while selectors might just look at Krunal Pandya or Manish Pandey as an option. Former India opener and cricket analyst Aakash Chopra feels that Raina won’t be a bad choice.

If the team management is looking at a short term goal that is the World Cup in England next year, Raina won’t be a bad choice. Also if Hardik Pandya is your fifth bowler, then one among the top six would need to roll his arm over. I am also excited about Rishabh but then you already have MS and DK in the side, Chopra opined.

Former India stumper Deep Dasgupta’s choice is either Krunal Pandya or Raina. I think apart from Shikhar, I would love to see another left-hander in Krunal or Suresh in the top six. My logic is that each and every team would have a leg-spinner in their side. So a left-hander for me in middle order is a must. It is an added advantage that both Suresh and Krunal are handy bowlers. But if Kedar is fit, then they shouldn’t look elsewhere, Dasgupta added. 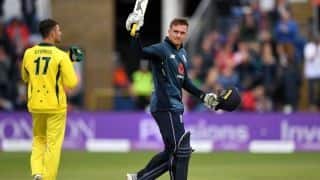