Mohammed Siraj isn't fretting over whether he can become a regular fixture in the national team and feels that if he merits a place, the selectors will call him on their own.

Pacer Mohammed Siraj put up an impressive show on the opening day of India A vs South Africa A unofficial Test at the M Chinnaswamy Stadium in Bangalore on Saturday. Siraj finished the day with figures of 3/56 as the visitors were reduced to 246/8.

Siraj recently returned from India A’s tour of England where he was part of the team that played against an England A side in an unofficial Test. There, the 24-year-old pacer stole the limelight with a peach of a delivery to clean up Alastair Cook, the first Englishman to score 10,000 runs in Test cricket.

Siraj was bought by Virat Kohli’s Royal Challengers Bangalore last season and then in November last year, went on to make his India debut in a T20I against New Zealand. All this after he started bowling with a cricket ball only in 2015. Obviously, the youngster must have made some sort of an impression to have deserved such a quick rise to his career.

However, with the national team already boasting of a world-class pace attack, Siraj will have to put up impressive performances regularly and then wait before becoming a regular fixture. And he feels that if he does enough, the call will come on its own.

“I am now focussed on the India A match against South Africa ‘A’. I want to chip in for the team in this match, he was quoted as saying by Mid-day on Sunday. “It is not wise for me to think too far ahead and drift away from the present. If the selectors and team think tank feel that I have done something to merit a place in the national team, then they will call me up at the right time.”

The Hyderabad-born bowler cherishes the dismissal of Cook and feels that it will do his confidence a world of good. “It was a great feeling to dismiss a batsman like Alastair Cook. He is a reputed international batsmen and it will certainly help my confidence when I get a chance to bowl against such classy batsmen in future. I am so happy to get his wicket,” he said. 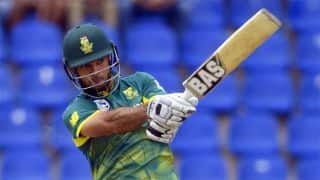