Some of India's senior cricketers, including captain Mahendra Singh Dhoni, are likely to skip the upcoming One-Day series against the West Indies starting early June. The Indian team wait for a DRS review during the 2011 ICC World Cup Final between India and Sri Lanka at the Wankhede Stadium on April 2, 2011 in Mumbai, India.

Some of India’s senior cricketers, including captain Mahendra Singh Dhoni, are likely to skip the upcoming One-Day series against the West Indies starting early June.

While some senior players may skip only the ODI series, others who have injury problems in recent times may opt out of the entire tour of the West Indies where they play one Twenty20 International, five ODIs and three Tests during the tour starting June 4.

Opening batsman Virender Sehwag is likely to miss the entire tour of the West Indies to regain full fitness, while other senior players like Dhoni, Sachin Tendulkar, Gautam Gambhir, Zaheer Khan and Harbhajan Singh may be rested in a phased manner.

It is learnt that some senior players have already written to the BCCI expressing their desire to skip the tour of the West Indies so that they are fit enough for the crucial tours of England and Australia later in the year.

India have a hectic international schedule this year.

Immediately after the ongoing Indian Premier League, India will tour the West Indies for five ODIs and three Tests, followed by a long tour of England in July-August.

England will then come to India for a One-Day series in November and West Indies will follow for a three-Test and five ODI series. The Indians then travel to Australia for a high-profile series in December-January.

If the senior cricketers are rested, some of the players who have done well in the ongoing IPL like Paul Valthaty of Kings XI Punjab and Ambati Ryudu of Mumbai Indians may get an opportunity.

There is also speculation that Yuvraj Singh, who has been in terrific form and named the player of the tournament in the World Cup, could be named captain in the absence of Dhoni and other senior players.

When contacted, BCCI Chief Administrative Officer Ratnakar Shetty said that he was not aware about senior players wanting to skip the ODI series against the West Indies.

However, BCCI sources said that is almost certain that a few senior players would pull out of the series and they would write to the BCCI in due course of time. 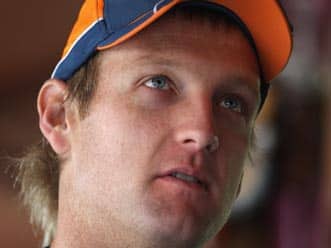 Deccan have plans to tackle Sehwag and Warner: White