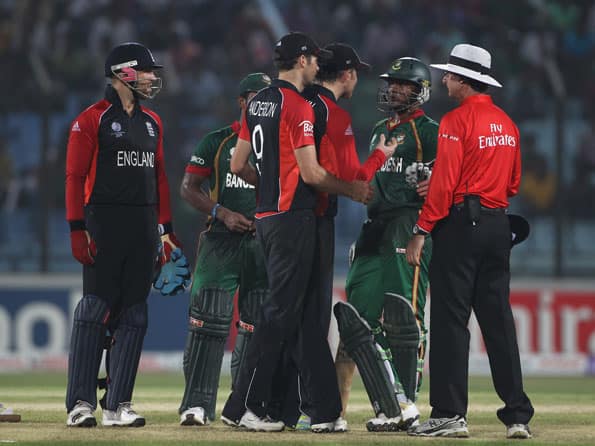 The runout of Imrul Kayes gave England some hope after he added 82 runs with Shakib Al Hasan to bring Bangladesh closer to the target, but after his dismissal, Mushfiqur Rahim fell cheaply, which added more to England s advantage. Bangladesh are struggling at 166 for six in 37 overs.

Bangladesh skipper Shakib, who was bowled by Graeme Swann, and Kayes steadied the innings after England struck thrice in quick successions, adding 50 runs in 11 overs to take Bangladesh to 121 for three in 25 overs.

After a brisk start provided by openers Tamim Iqbal and Kayes, England struck thrice as Bangladesh were left reeling at 75 for three in 15 overs.

Earlier in the day, England were bowled out for 225 in 49.4 overs by Bangladesh in the World Cup Group B match at the Zahur Ahmed Stadium in Chittagong. After Jonathan Trott and Eoin Morgan were dismissed, England’s tailenders along with Paul Collingwood couldn’t do much and were bundled cheaply.

Naeem Islam dismissed Morgan for a well made 63 off 72 balls, and Shakib Al Hasan removed Trott for 67 off 99 after the two had revived the England innings with a 109 runs stand for the fourth wicket. Their century stand came after Bangladeshi spinners took three in quick succession.

After losing Andrew Strauss and Matt Prior cheaply, Bangladeshi spinner Mahmadullah added more to England s woes when Ian Bell 5 off 23, was caught at the midwicket by Naeem Islam.

Being put in to bat first by Bangladesh captain Shakib Al Hasan, England started sluggishly with wicketkeeper Prior moving up in order to fill in for Pietersen, as he along with captain Strauss gave England a cautious but slow start.

Bangladesh started off well with strike bowler Rubel Hossain giving just five runs of his three overs. Prior and Strauss attacked Shafiul Islam on the other end as he leaked 22 runs in his spell of three overs.

The second bowling change worked for Bangladesh in the seventh over as spinner Abdur Razzak dismissed Prior off his very first delivery in a bizarre way the ball went down the leg and was a wide, before wicketkeeper Mushfiqur Rahim could dislodge the bails Prior dragged his leg inside. While the Bangladeshi fielders were appealing Prior walked outside the crease, and Rahim smartly took off a stump to send Prior back to the pavillion. England were 39 for one.

Jonathan Trott joined Strauss in the middle to rebuild England s innings but skipper Strauss, who hit a boundary off Naeem Islam with a fine cut shot in the third man area, was caught on the first slip by Junaid Siddique.