With the 13th season of IPL round the corner, expectations would be riding high on the Shubman Gill to deliver. Bollywood star and Kolkata Knight Riders owner Shah Rukh Khan was conducting a Q/A session #AskSRK on Wednesday on micro-blogging site Twitter, something he engages in once in a while.

In the session, fans ask him questions ranging from movies to life philosophies and almost anything and everything under the sun. A certain fan attending the session took the opportunity and asked Khan about when is his IPL franchise KKR planning to make young Shubman Gill the captain.

The fan asked, When will @KKRiders make @RealShubmanGill the captain? And, just as expected, Shah Rukh, who is famous for his wit and humour, said this: “As soon as KKR makes you the Head Coach my friend.

As soon as KKR makes you the Head Coach my friend. https://t.co/1SSCwWLS8E

The response from the Bollywood actor was loved by his fans and it was retweeted 1.4 K times.

Following his good run in the U-19 World Cup, the 20-year old was brought onboard by the franchise in 2018. In 27 IPL games spread over two seasons, the Punjab-born has amassed 499 runs at an average of 33.26 and at a strike-rate of 133.36 with the help of four half-centuries.

With the 13th season of IPL round the corner, expectations would be riding high on the young gun to deliver. He would most certainly be one of the key cricketers for the franchise and a lot of hopes would be pinned on him.

In 2020, at the auctions, KKR brought a few players and here is how the final squad looks. 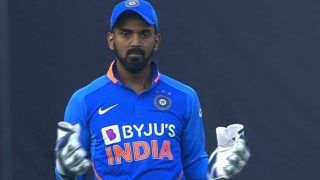