The Dhaka court will hear the witnesses' testimonies on March 22.

Dhaka: Bangladesh cricketer Shahadat Hossain and his wife face trial on charges of torturing their underage house help following their indictment by a Dhaka court here on Monday. The Women and Child Repression Prevention Tribunal-5 framed the charges against the two on Monday and fixed March 22 for hearing the witnesses’ testimonies. The couple, now on bail, appeared before the court during the hearing, reports bdnews24.com. In September last year, Hossain filed a complaint with the police, claiming his house help had gone missing. But hours later, the 11-year-old girl surfaced to accuse the cricketer and his wife of subjecting her to regular torture. READ: Shahadat Hossain and wife face 14 years imprisonment for torturing underage maid

Police said one Khandkar Mozzamel Haque found the girl at Mirpur and took her to the local police station. Haque later filed the case. The couple were absconding until police arrested the pace bowler’s wife on October 4. The next day, Hossain surrendered in the court of the Dhaka Metropolitan Magistrate, which rejected his bail plea and sent him to prison. On December 1, the same court granted bail to his wife. Hossain then moved the court of the Dhaka Metropolitan Sessions Judge for bail, but was turned down. On December 8, the High Court granted him bail until March 31, 2016. READ: Shahadat Hossain jailed after surrender in court over allegations of beating 11-year-old maid

The fast bowler last played for Bangladesh in May last year against Pakistan. He went off the field on the first day of the first Test with a leg injury. Bangladesh Cricket Board (BCB) had him treated in Australia and he was going through a rehabilitation programme. The BCB has said that reports of Hossain torturing a minor were ‘utterly embarrassing’ and banned the pacer from all forms of cricket until the charges were resolved. Hossain has played 38 Tests, 51 One-Day Internationals (ODI) and six Twenty20 Internationals. 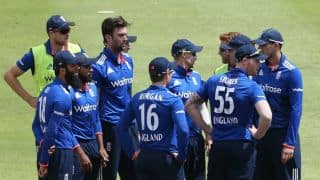