Shahid Afridi can be retained for ODI series against India

Shahid Afridi can be retained for ODI series against India

Pakistan's flamboyant all-rounder Shahid Afridi can be retained for the three ODIs in India if he strikes form in the two T20 International matches to be held in Bangalore and Ahmedabad. 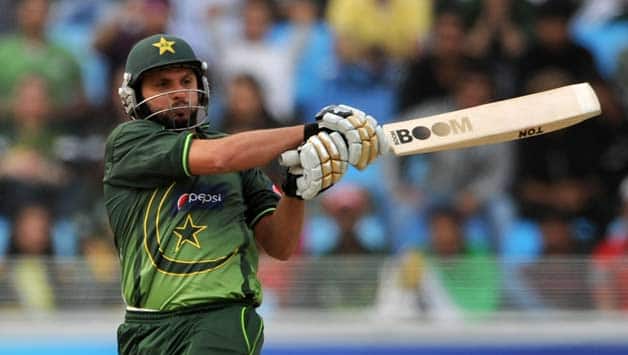 Pakistan‘s flamboyant all-rounder Shahid Afridi can be retained for the three ODIs in India if he strikes form in the two T20 International matches to be held in Bangalore and Ahmedabad.

There has been a lot of hue and cry over the decision of the national selection committee to drop Afridi for the ODI series while retaining him in the T20 squad.

But chief selector Iqbal Qasim indicated on Thursday that if Afridi did well in the T20 matches and if the team management made any request to retain him for the ODIs, the selection committee would definitely consider the request.

“Shahid is a very experienced player and we felt the time now was to give him a chance to focus on the two T20 matches as his form has not been consistent in the ODI matches,” Qasim said.

“We want him to regain his confidence. It is a wrong impression that we have lost confidence or faith in him.”

A well-placed source confirmed that after the captain of the one-day team, Misbah-ul-Haq had wanted Afridi’s inclusion in the ODI squad but the selectors told him that if Afridi did well in the T20 matches, they would allow Afridi to stay back for the ODIs.

The source also said that it had been decided that despite criticism from some quarters particularly during the recent World T20 Cup Mohammad Hafeez would continue to open in the T20 and ODI matches.

Hafeez, who leads the T20 national team, had batted lower down the order in the just concluded national T20 championship where he led the Lahore Lions team to the title.

This raised hopes among his critics that Hafeez had finally decided to bat lower down the order in India.

But the source said there was no such plan and Hafeez would open the innings in the T20 games.

“He made it clear to the selectors at the meeting that domestic cricket was different but in international cricket, he faced comfortable facing the new ball and would open the innings.”