The return of former Pakistan captain Shahid Afridi for next month's one-day series against Sri Lanka appears imminent after the flamboyant cricketer decided to come out of a self-imposed exile from the game earlier this month. 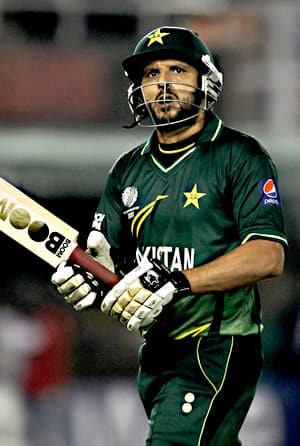 Shahid Afridi has been assured a place in squad for Sri Lanka series by some political figures, who supported his comeback Getty Images

The return of former Pakistan captain Shahid Afridi for next month’s one-day series against Sri Lanka appears imminent after the flamboyant cricketer decided to come out of a self-imposed exile from the game earlier this month.

Afridi has been assured by some political figures, who supported his comeback, that he would be in the national team for the ODI series against Sri Lanka if he revoked his retirement decision, a source confirmed.

The 31-year-old had announced his retirement in late May to protest against the Pakistan Cricket Board’s decision to remove him as captain after the West Indies tour.

Afridi was also fined Rs 4.5 million by the disciplinary committee of the board for breaching the code of conduct but was given permission to play in foreign leagues.

The all-rounder, an extremely popular figure with the masses in Pakistan, announced earlier this month he was available for national selection again after President Asif Zardari appointed Zaka Ashraf as the head of the PCB in place of Ijaz Butt.

The mercurial cricketer also made it clear that he was ready to play for Pakistan again since the team management had been changed, a reference to the resignation of coach Waqar Younis after the Zimbabwe tour in September.

“Afridi is certain to make a comeback to the one-day side for the series against Sri Lanka, it was part of the deal he worked out with the political and other influential figures who were involved in his comeback,” a source said.

Acting chief selector, Muhammad Illyas, has already said that the selectors would consider Afridi for national selection only after the board gives them the clearance to recognise him for selection.

“Afridi has been assured that with a new Chairman now heading the cricket board he would be part of the national one-day side,” the source added.

“The new Chairman has come in after being conveyed by the powers that he should try to sort out the controversies involving senior players many of whom were shown the door or forced to take the back door by Butt due to his iron fist policy of dealing with the players,” another source revealed.

Afridi, who led Pakistan to the 2011 World Cup semifinal, has not played for Pakistan since May.

Many former players had advised Afridi to take back his retirement decision and former captain and great, Wasim Akram has told him to now just focus on cricket.

“If you look at his performance as a bowler in the last one year that itself is enough to guarantee him an immediate comeback to the one-day side,” former captain, Rashid Latif said.

Afridi is presently in Hong Kong playing for the super stars team. He was also a played in the recently held national Twenty20 championship for Karachi Dolphins. (PTI)