Shahid Afridi who has stepped down as skipper of Pakistan believes there are no real talent present in national side anymore.

Karachi: Pakistan’s flamboyant all-rounder Shahid Afridi is concerned about the future of Pakistan cricket and wants the PCB to go back to the basics and work at the grassroots level. Afridi who stepped down as the national T20 captain last month after the team’s dismal shows in the Asia Cup and World T20 said he was worried that there was no real strong talent present in Pakistan’s domestic structure. “The way I see it right now we don’t have that much real talent in the background. I can’t pinpoint any young player with certainty. I think the Board needs to pay attention to school cricket and work at grass-root level,” he said while speaking to Geo Super channel. ALSO READ: Waqar Younis blames Shahid Afridi for Pakistan’s defeats in World T20, Asia Cup 2016

Afridi was also excluded from a month-long training camp announced for the tour to England on Monday by the national selection committee but said he had already informed the board about his non-availability. “I am just focusing on T20 cricket and I had informed the board about my commitment in English county cricket this summer. But I will obviously work hard on my form and fitness in order to make the Pakistan team,” Afridi said. Chief selector, Inzamam-ul-Haq also made it clear at a media conference that Afridi was not dropped and would be considered for future T20 matches but the selectors wanted to focus on young talent.

Pakistan plays just one T20 in England and two more against the West Indies in UAE in October. Afridi said he was not aware why Ahmes Shehzad and Umar Akmal were dropped from the side. “I don’t know why they are dropped but if discipline is the reason than obviously they need to pay attention to this and work harder on their cricket. I also agree that there should be no compromise on discipline and it is time to give young players a chance,” he added. Afridi said he would support any move by the selectors to improve things in Pakistan cricket. 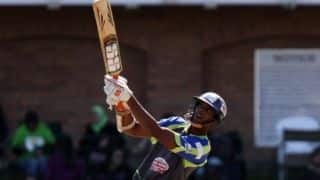