On Friday, Shahid Afridi took to Twitter to thank Najam Sethi for meeting him last Sunday and offering to arrange a "fitting farewell" for him.

Karachi: Former Pakistan T20 skipper Shahid Afridi has declined Pakistan Cricket Board (PCB) Executive Committee chairman Najam Sethi‘s offer to give him a farewell upon his retirement from international cricket. On Friday, Afridi took to Twitter to thank Sethi for meeting him last Sunday and offering to arrange a “fitting farewell” for him. “Thank you for the meeting and farewell offers @najamsethi. Unfortunately due to my commitments I won’t be able to take them ,” he said. The 37-year-old said he was happy that veterans like Misbah-ul-Haq and Younis Khan, who have announced their retirements from international cricket after the ongoing three-Test series against West Indies, were getting proper farewells. Shahid Afridi acknowledges Virat Kohli and Indian team members gesture on his retirement

“My desire was to set a new trend. I’m very happy that Misbah&Younis are getting proper farewells. I hope this trend will continue in future,” he added. In 2016, Afridi had made headlines with his demand for a farewell match during the three-match T20 series against the West Indies which Pakistan went on to clean sweep. “Farewell match is my right”, Afridi had insisted while urging the PCB to provide him with an opportunity to bid adieu to international arena in a befitting manner. In February, the flamboyant all-rounder had announced his retirement from international cricket, bringing to an end his illustrious 21-year career.

Nicknamed ‘Boom Boom’, the all-rounder was active in the International T20 format after having quit Test cricket in 2010 and ODIs in 2015. Afridi finished his international career having played 27 Test matches, in which he hit 1,176 runs with a highest score of 156 and 48 wickets. In the 398 ODIs that he played throughout his career, he notched up 8,064 runs, with a highest score of 124, and took 395 wickets with his leg spin. His T20I international career saw him play 98 matches and score 1,405 runs and take 97 wickets. 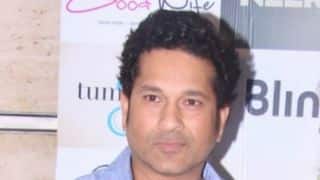 IPL 2017: Did Gautam Gambhir, Manoj Tiwary get involved in heated exchange of words during RPS vs KKR game?