Butt said he was pleased with the way Shahryar handled the captaincy issue after the third ODI.

Former chairman of the Pakistan Cricket Board Ijaz Butt doesn’t appear to have forgotten his three-year-old dispute with flamboyant all-rounder Shahid Afridi as he said that the former captain didn’t deserve to be in the national team.

After an impromptu meeting with the serving chairman, Shaharyar Khan at the Gaddafi stadium in Lahore, Butt told reporters that in his personal opinion Afridi shouldn’t be in the team. “If you ask for my opinion I don’t think he should be in the side on his performances but this is something for the selectors to decide. If they feel he still has a role to play in the team so be it,” Butt said.

Butt, a former test player, who served as chairman from 2008 to 2011 had a penchant for stirring up controversies and in mid-2011 he sacked Afridi as the T20 and ODI captain on disciplinary grounds although the all-rounder had led Pakistan to the semi-finals of the ICC World Cup 2011 a few months earlier. The dispute between Afridi and Butt simmered down after the interference of some key government leaders and politicians.

Butt said the fact was that if there had been some other chairman in place of Shaharyar when Afridi made the comments about the captaincy he would have sacked him. “Shaharyar is a noble and honest persons and I told him today that on the captaincy issue there is no need to remove Misbah-ul-Haq until the World Cup no matter what his form,” Butt said. “Misbah has served Pakistan cricket well since the spot fixing scandal and led the side sensibly and intelligently and today if he is struggling for form he needs to be given full support and encouragement.”

Butt said he was pleased with the way Shaharyar handled the captaincy issue after the third ODI against Australia by making it clear that the board recognised Misbah as their captain till the World Cup. Butt said he had not given up hope on the Pakistan team as it had some good players and they could get back into form before the World Cup. “Certainly I will not write them off and I think this Test series against Australia and New Zealand will do them a world of good,” he added. 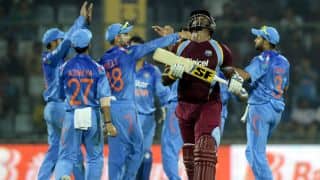