Not long back, Umar Akmal was suspended from the Pakistan Super League (PSL) after being approached by a bookie ahead of the tournament. With repeated cases where Pakistan cricketers are being approached by bookies is a failure on part of the Pakistan Cricket Board to set strong examples felt former skipper Shahid Afridi.

Not long back, Umar Akmal was suspended from the Pakistan Super League (PSL) after being approached by a bookie ahead of the tournament.

“I feel these examples should have been set in the past but this didn’t happen and that is why we have seen such cases on a regular basis,” Afridi told the Geo channel.

Stating that he has nothing against the board, he showed faith that it can still do it.

“I have nothing against anyone but even now if the Board wants to set an example it can do that. Only then can we hope to curtail such cases,” he added.

Calling Umar a fine batsman, Afridi said he should be careful about the company he keeps snd get his priorities right.

Commenting on Umar, he said: “Umar really needs to look at the company he keeps. He needs to get his priorities sorted out. He is a fine batsman but he can’t keep on carrying like this.”

Afridi also made it clear that the PCB should groom the players. “Most of the Pakistani players come through without any proper educational background and they are prone to falling prey to people who encourage corruption in the game.

“I just feel that the board must have a grooming and education program for these players. I think it is about how well you manage talent. Umar is one example. But just telling them about the anti-corruption clauses is not enough.” 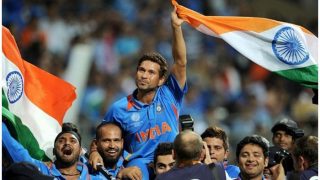 It Was an Emotional Win For Entire Nation: Sachin Tendulkar on 2011 WC Win