Shahid Afridi said he hoped a tough ICC World T20 2016 draw would motivate his team to win the title for the first time in seven years and beat arch-rivals India.

Karachi: Pakistan’s Twenty20 captain Shahid Afridi on Thursday said he hoped a tough ICC World T20 2016 draw would motivate his team to win the title for the first time in seven years and beat arch-rivals India along the way. The 2009 champions are placed in Group 2 of the Super Ten round in the sixth edition of the World Twenty20 to be held from March 8 — April 3 2016, along with hosts India, Australia, New Zealand, and a yet to be decided qualifier. Their second match will be against India, a team they have never beaten in either a traditional one-day World Cup or the newer World Twenty20. Afridi told AFP: “We have a tough draw but I am hopeful that this challenge will pump-up my team to win the title and on the way beat India.” Pakistan lost to India in both the group round and final of the inaugural World Twenty20 in 2007 and then in two subsequent tournaments. READ: India, Pakistan drawn in Group B for ICC World T20 2016

They have also lost to India every time they have faced them in six World Cups. But Afridi said it was time for a change. “I don’t want to live in history,” he said. “Whatever mistakes we usually make in the matches against India we have to overcome them.” Pakistan’s recent form does not augur well. Last month they lost to England 3-0 in a Twenty20 series in the United Arab Emirates, slipping to six in the rankings. “We made school boy errors and despite putting up good fights in all three matches we lost by narrow margins so we have to be on our toes and should not repeat those mistakes,” said Afridi, who is set to draw the curtain on his two-decade long career after the event. READ: India-Pakistan ICC World T20 2016 clash confirmed for March 19 at Dharamsala

Pakistan have three Twenty20 matches on their tour of New Zealand next month before featuring in the six-nation Asia Cup Twenty20 in Bangladesh in February. “We have enough matches before the World Twenty20 so we have to find a settled combination and I hope we do well in these matches and carry that form into the World Twenty20.” READ: CC World T20 2016: Dharamsala gets green signal from inspection team 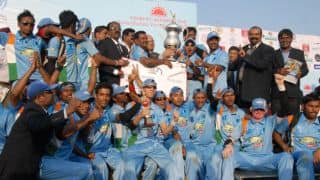 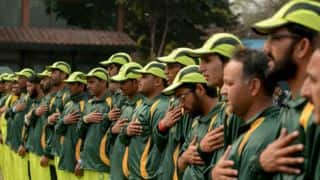