Shahid Afridi cited knee niggle as the reason behind his unavailability for PCB's fitness test.

Karachi: Pakistan’s flamboyant all-rounder Shahid Afridi and senior batsman Mohammad Hafeez have decided to skip a four-day fitness test ordered by the Cricket Board for all its centrally-contracted players. Even though the new selection committee headed by Inzamam-ul-Haq had ignored Afridi, opener Ahmed Shehzad and Umar Akmal for the month-long training camp being set up in Abbotabad for the tour to England, all three were directed to appear for the fitness tests. Even Hafeez, whose appearance in the camp was subject to fitness was told to take the fitness tests which began in Lahore today. Live Cricket Scorecard: Mumbai Indians vs Sunrisers Hyderabad, IPL 2016 Match 37 at Visakhapatnam

But Afridi tweeted about his non-availability for the tests. “I have told @TheRealPCB that I won’t be available for fitness test due to knee niggle,” tweeted Afridi. Afridi said he is recuperating to be fit to represent English County side Hampshire and join them for their domestic T20 event. “I am keen to play for Hampshire and I want to regain fitness before joining them,” Afridi said. Hafeez also said he had informed the board about his unavailability for the fitness tests. READ: Abdul Qadir asks Shahid Afridi to retire, slams son-in-law Umar Akmal

Hafeez said he couldn’t take the tests since he was yet to recover completely from injuries in the knee muscle. “I have been undergoing a rehabilitation program at the national academy for the injury since the last six weeks but it is too early to say how much time it will take for me to make a complete recovery,” Hafeez said. 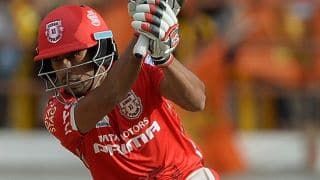