The PSL is slated to be held in the United Arab Emirates in February 2016.

Karachi: Pakistan Twenty20 skipper Shahid Afridi has said that the upcoming Pakistan Super League (PSL) will provide a great opportunity for his country’s players to gain ‘invaluable experience’. Afridi said that it would be a great opportunity for Pakistan players, as they would be competing alongside big sporting superstars, the Express Tribune reported. The inaugural edition of the T20 cricket tournament will comprise of five teams – Quetta, Karachi, Peshawar, Lahore, and Islamabad. The glittering tournament will feature international superstars like Chris Gayle, Kevin Pietersen, Lasith Malinga, Luke Wright, Grant Elliott and Tim Bresnan. The PSL is slated to be held in the United Arab Emirates in February 2016. READ: Shahid Afridi disappointed PSL will be staged in Qatar instead of Pakistan

Shahid Afridi had earlier said that Pakistan should not beg for series with BCCI. Afridi was recently picked by Shane Warne in his greatest Pakistan XI (since 1990). . Afridi was disappointed when PCB declared that PSL will be played in Qatar. According to Afridi presence of local crowds was more important than participation of foreign players. Afridi is considered one of the most entertaining batters in cricket. He is known for his aggressive batting but he lacks consistency. He is a handy spinner as well. Afridi has a strike rate of 117 in one-dayers which is by far one of the best strike rates overall; however his average is a paltry 23.57. The 35-year-old has also taken 395 ODI wickets. Shahid Afridi: Revival of cricket in Pakistan crucial 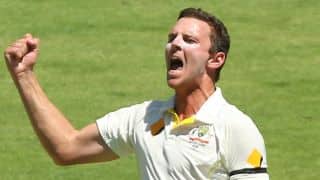