Shahid Afridi announced he would retire from Twenty20 cricket next year.

Karachi: Pakistani all-rounder Shahid Afridi Thursday announced he would retire from Twenty20 cricket next year, ending a colourful international career which earned him unmatched popularity in his homeland. The 35-year-old retired from one-day cricket after last month’s ICC Cricket World Cup 2015 held in Australia and New Zealand where Pakistan reached the final eight, but said he would continue to play the shortest form of the game. Shahid Afridi: Will quit, if I become a burden for the team

“I will retire from Twenty20 cricket after next year’s World Twenty20,” Afridi, who left Test cricket in 2010, told reporters. “I will continue to play county in England and a few Twenty20 leagues but my international career will end next year.” India host the sixth edition of the World Twenty20 in March-April next year, where Afridi said he hoped to leave on a high. “I want to finish my career with pleasant memories and had never thought I will play for Pakistan for so long,” said Afridi. Shahid Afridi: The enigma of Pakistan cricket

Surprisingly inducted at the young age of 16, Afridi made headlines around the world when he smashed a 37-ball hundred in only his second one-day international, against Sri Lanka in Nairobi in 1996, setting a world record. The record stood until last year when it broken by New Zealand’s Corey Anderson with a 36-ball hundred and then bettered by South Africa‘s AB de Villiers who raced to a century off just 31 balls, against the West Indies in January this year. Shahid Afridi retirement: Boom Boom’s final innings summed up his career

Afridi, known for his madcap approach to batting, his skillful leg-breaks and good looks, maintains the world record for most sixes: 453 across all formats of the game. He was appointed Twenty20 captain last year, having earlier led Pakistan in one-day internationals and Tests as well. He scored 8,064 runs in 398 one-day internationals but fell just five short of 400 wickets. Shahid Afridi’s performances are worth the wait 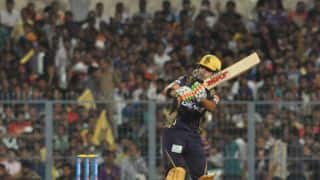