Flamboyant allrounder Shahid Afridi has called on the Pakistanis to support and pray for the success of the national team in the ICC T20 World Cup, to be held later this month in Sri Lanka. Flamboyant allrounder Shahid Afridi has called on the Pakistan fans to support and pray for the success of the national team in the ICC T20 World Cup, to be held later this month in Sri Lanka.

Afridi’s appeal came after Australia swamped Pakistan in the third and final T20 International in Dubai on Monday, raising questions over whether the team was prepared for the World Cup.

Pakistan suffered their heaviest defeat in a T20 match to dampen spirits after a nail-biting win in the second match last Friday.

“It is disappointing that we couldn’t complete a clean sweep of the T20 series today but we need to now focus on the World Cup,” Afridi told Pakistani media in Dubai.

“We have the ability to do well in the World Cup and people must keep faith in the players and pray for our success,” he added.

The allrounder, who missed the T20 series due to a injured left thumb that he sustained during the one-day series against Australia, said that the team was playing well under Mohammad Hafeez.

“He has done a good job and led the team well but we need the support and prayers of our people who must not be disappointed with today’s result,” he added.

About his own form Afridi said he was working hard on his batting and taking guidance from coach Dav Whatmore.

“Whatmore is helping me out a lot and I know my batting will be equally important in the coming months,” he said.

Pakistan’s hopes of completing a clean sweep of the T20 series were wiped out in a ruthless fashion by the Australians as the batting failed miserably.

The defeat came on the same day that the chairman of the Pakistan Cricket Board, Zaka Ashraf expressed hope in Dubai that the team would reach the final of the World Cup. Just before that, Hafeez and Whatmore had claimed the team was looking for a clean sweep against the Aussies.

“Everyone associated with the board and team needs to learn one lesson from the defeat that it is wise to be careful with your words and statements and let the team’s performance do the talking,” former Pakistan captain, Rashid Latif said.

He said the T20 World Cup was a tough assignment because it would be the most open tournament, and Pakistani players needed to focus on the challenges ahead and avoid making too many statements in the media.(PTI) 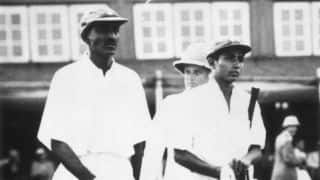