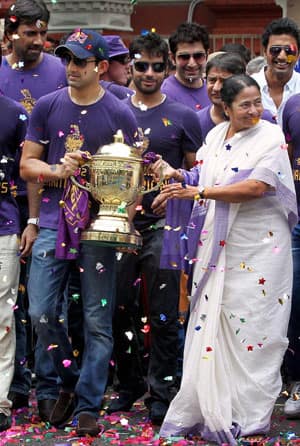 “There is no harm in being happy and sharing happiness. Nobody should criticise it. It’s alright to be happy,” said Shahrukh, the co-owner of the Kolkata Knight Riders which lifted the Indian Premier League (IPL) trophy.

“Let’s not be political. It has been done because we all are happy. There is no wrong if we bring a small pinch of happiness in the city of joy,” he said.

King Khan, who is also Bengal’s brand ambassador, along with the KKR team was felicitated by Banerjee for winning the IPL tournament.

With a frenzied crowd of thousands cheering on, KKR took a victory parade from south Kolkata’s Hazra Crossing on a flower-bedecked open top trailer.

Around 70,000 people gathered at the Eden Gardens where the team was given a civic reception whereas 20,000-30,000 stood outside to have a glimpse of Shah Rukh and Gautam Gambhir.

Banerjee’s gala felicitation at Eden Gardens had drawn severe criticism from a section of the people who had slammed the state government for spending so much money on the felicitation of a private cricket team. (IANS)