The 48-year-old actor says he never lost his cool when his team lost matches.

Bollywood superstar Shahrukh Khan, co-owner of Indian Premier League (IPL) team Kolkata Knight Riders (KKR), the 2012 champions, on Thursday said he is satisfied with the its performance and has no plans to sell it.

Shahrukh will share his journey with KKR in ‘Living With KKR’, a four-part TV series that airs on Discovery Channel February 24-27.

“We will never sell the team; it goes up and down with us. The players are like our children and now that we have won, we are all the more happy,” SRK, who co-owns KKR with actress Juhi Chawla and her husband and businessman Jay Mehta, told reporters at the ‘Living With KKR’ press conference.

The 48-year-old also clarified that he never lost his cool when his team lost matches.

“I don’t scold anyone. I speak to everyone politely. They haven’t lost the match purposely; even they are upset. You can’t scold a sportsman, you have to believe them,” he said.

The TV series traces the emotional journey of the team from its disappointing first three years to its redemption as IPL champions in 2012. SRK confesses he was moved by the film.

“I felt like crying… I had tears in my eyes when I was watching it, so I had to wear my goggles. It’s a very emotional moment for me and I am overwhelmed,” he said, adding that he will use the documentary as a motivational tool for his team.

“A documentary is being made because we won it [IPL title], so I would like to say go ahead and win if you don’t win nobody will make documentary (smiles). Wining does matter,” he added.

Another highlight of the series is that it will bring forth the role played by co-owners Juhi and Jay.

SRK says that the colour of KKR’s jersey was changed from black to purple on Juhi’s behest and not because he was superstitious.

He said: “Juhi wanted it to be purple, but I am not superstitious at all. When you need someone to blame that is when you get into superstition. I will take the blame, not fall on superstition.” 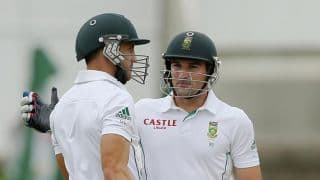