The Bollywood superstar had missed the opening clash of his side Kolkata Knight Riders.

An elated co-owner of the Kolkata Knight Riders‘ (KKR) franchise, Shahrukh Khan expressed delight over his side’s win in the opening match of the Champions League T20 (CLT20) 2014 against Chennai Super Kings (CSK) at Hyderabad on Thursday.

Shahrukh took to Twitter once again for expressing his delight. The Bollywood superstar had missed the opening clash of his side as he is busy with his upcoming movie ‘Happy New Year’.

I am beginning to dance for more reasons than one. SLAM…HNY & my boys from KKR… pic.twitter.com/2MFGIE9GHb

Andre Russell smashed a breathtaking half century while Ryan ten Doeschate struck a fine unbeaten 51 to guide IPL champions Kolkata Knight Riders to a seven-wicket win over Chennai Super Kings in a Group A match.

Chasing a competitive 158 for win, KKR were in trouble after slumping to 51 for five inside 10 overs. But Russell (58 off 25) and Ten Doeschate shared match-winning 80 runs for the sixth wicket off just 42 balls to keep KKR afloat.

After Russell’s dismissal, ten Doeshchate took the onus on himself to guide KKR home and managed to achieve that with six balls to spare. KKR’s chase, however, started on a horrendous note as they lost their first four wickets inside the 30-run mark. 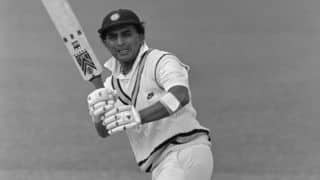 Shivnarine Chanderpaul: First batsman to witness 500 dismissals from the other end in Test cricket