Shahryar Khan: Mohammad Aamer's case is different from those of Salman Butt and Mohammad Asif

Shahryar Khan: Mohammad Aamer's case is different from those of Salman Butt and Mohammad Asif

Butt, in a recent statement, has appealed to the PCB to plead his case.

The Chairman of the Pakistan Cricket Board (PCB) Shaharyar Khan has ruled out any leniency for former Test captain Salman Butt and Mohammad Asif who are serving bans for spot fixing since 2010.

Shaharyar told reporters today in Lahore that while the PCB had started preparations for filing an appeal for banned pacer Aamir with the International Cricket Council (ICC), it had no such plans for Butt and Asif.

“The PCB is completing all legal formalities and will file an appeal with the ICC soon to get some relaxation for Aamir under the revised anti-corruption code of the ICC,” said Shaharyar.

“But we have no plans to do the same for Butt and Asif at the moment. First they have to convince us they indeed repent for what they did and are ready to reform themselves,” he added.

The trio was banned for spot fixing during the fourth Test against England at Lords in 2010 and later also served jail sentences in the United Kingdom for the same offence.

The three cricketers have been given minimum five-year bans by the anti-corruption tribunal of the ICC but while the ban for Butt and Aamir ends in August, 2015, the former also has been given a two-year suspended sentence.

“Aamir’s case is different from those of Butt and Asif. These two have still not really accepted their guilt. We want them to do more to first convince us they are indeed reformed,” said Shaharyar.

Under the revised code, a banned player can apply to the ICC ACU to allow him to resume playing domestic cricket before his ban ends.

Shaharyar pointed out that Aamir’s case was different since he was very young when the incident took place and secondly he immediately repented and accepted his guilt.

“And he has cooperated fully with us and the ICC in reforming himself and helping in the fight against corruption,” the PCB chief said.

He said that except for a short statement from Butt and Asif which came after much delay, they had not worked with the PCB on their rehabilitation.

“First they convince us and then we will decide when to approach the ICC to seek relaxation for them as well,” Shaharyar said.

He clarified that it was wrong to presume that once the PCB appealed to the ICC Aamir could make a quick return to competitive cricket.

“His case will be scrutinised and dealt with by the ICC and its anti-corruption unit under a due process which will take some time.”

Butt, in a recent statement, has appealed to the PCB to plead his case. 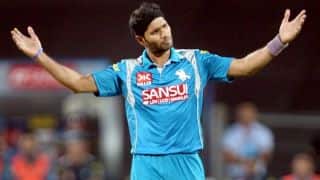