England Women players in Heather Knight, Natalie Sciver and Anya Shrubsole have been named in Wisden's five Cricketers of the Year list.

West Indies batsman Shai Hope, Essex bowler Jamie Porter and three England Women players Heather Knight, Natalie Sciver and Anya Shrubsole have been named Wisden’s Cricketers of the Year in 2018. This is first time since Marlon Samuels in 2013 that a West Indies player has been choice in the list. This is also third time, after Claire Taylor and Charlotte Edwards, that female players have been included in the list.

Knight, Sciver and Shrubsole were instrumental in England’s Women’s World Cup 2017 winning campaign. Earlier in the year, Shrubsole became the first woman to grace the cover of Wisden Almanac since its inception in 1864. Hope became the first player to slam centuries in both innings of a First-Class match on Headingley, during England Test against West Indies. Porter was Essex’s leading wicket-taker in the last season, picking 72 wickets in 13 matches, which led to his side winning County Championship Division One title. 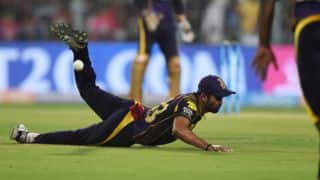