Shai Hope was elated to score his maiden Test century as the West Indies continued their impressive turnaround against England at Headingley on Saturday.

Shai Hope was elated to score his maiden Test century as the West Indies continued their impressive turnaround against England at Headingley on Saturday. Hope was 147 not out at stumps on the second day of the second Test, the 23-year-old’s stand of 246 with opening batsman Kraigg Brathwaite (134) helping take the tourists to a close total of 329 for five and a first-innings lead of 71 runs. It s a monkey off my back, Hope, who prior to this match averaged a lowly 18.61 in 11 Tests, told Sky Sports. FULL SCORECARD

It was more about getting the team over the line, trying to bat as deep as possible in the game. You know it’s going to swing, it’s England. The ball swung a lot when I first came in to bat. The key word for us was ‘fight’ and we fought as hard as we could. Throughout the day we said ‘we have to keep fighting and it’s not going (to be easy) but we can do it, we have to believe in ourselves’, and we did that today, Hope added.

West Indies suffered a humiliating innings and 209-run defeat in the series opener at Edgbaston, losing 19 wickets during last Saturday’s play as the inaugural day/night Test in England ended inside three days. That left them 1-0 down with two to play amid a torrent of criticism and with just a few days before the second Test got underway.

Brathwaite, whose hundred was his sixth in Tests, was delighted for his Barbados colleague after they came together with the West Indies deep in trouble at 35 for three following the loss of Hope’s older brother Kyle.

I am very happy for him, I know he works very hard and there’s no better place to do it than in England, said Brathwaite of Shai Hope. Once we put away the bad balls, that was the key and once you get some momentum that helps as well.

Meanwhile Brathwaite, asked to explain how the West Indies had made such a huge all-round improvement after a miserable display at Edgbaston, replied: Looking in the mirror at ourselves, looking at that game, we knew we could do better. As a team we decided we wouldn t give up and just work twice as hard.

That left Anderson on 495 Test wickets and just five away from becoming the first England bowler to take 500 at this level.

Worry for England ahead of the Ashes

But from then on England endured a frustrating day, something that concerned swing specialist Anderson given it’s just a couple of months until they begin their Ashes defence in Australia.

They batted well, we didn’t bowl very well, said the England spearhead. Ironing out this inconsistency is a big thing for this team going forward. We ve got a big tour of Australia coming up in the winter and we really need to turn things around. We can t go there, be inconsistent and expect to win the series, or any series to be honest. It s something we’re aware of.

We weren’t patient enough, we kept trying to find the magic ball even when the sun was out and it was flatter, said Anderson. We bowled quite a lot of bad balls and that’s not something we usually do. This is not the standard we set of ourselves. 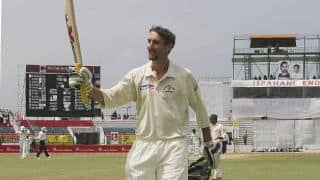