West Indies settled for a thrilling tie with Zimbabwe, in the third ODI at the Queens Sports Club in Bulawayo on Saturday.

West Indies middle-order batsman Shai Hope scored his maiden One-Day International (ODI) ton, but could not steer his team to a win, as visitors West Indies settled for a thrilling tie with hosts Zimbabwe, in the third ODI at the Queens Sports Club in Bulawayo on Saturday. Apart from Hope, it was Kraigg Brathwaite, who scored 78, and was also involved in a mammoth 162-run stand for the third wicket, with Hope, while Donald Tiripano and Sean Williams claimed a couple of wickets each. Zimbabwe turned the match in the final over, when Windied needed just four runs to win. FULL CRICKET SCORECARD: Zimbabwe vs West Indies, Zimbabwe Tri-nation series, 3rd ODI at Bulawayo

Earlier, Zimbabwe skipper Graeme Cremer won the toss and elected to bat first, as they posted a challenging total of 257, courtesy of Craig Ervine’s 92, and Sikandar Raza’s 77, while Carlos Brathwaite claimed 4 for 48. As for Zimbabwe, the openers in the form of Johnson Charles and Kraigg Brathwaite started on a steady note. However, with just 33 runs on the board, it was Charles, who fell for mere 19 to Donal Tiripano in the eighth over. Just 25 runs later, it was Evin Lewis, who fell for mere 18 to Cremer in the 12th over, with the match still being a close call, and on even terms.

Just 14 runs later, it was Kraigg, who fell for 78 to Sean Williams, in the 48th over, and the same over also saw the dismissal of Ravman Powell, who fell for mere 17, as the score read 242 for the loss of five. However, it was just after 13 runs, when Carlos Brathwaite fell for mere nine to Tiripano in the final over, while the very next ball saw Nurse getting unfortunately run out for a duck. The final ball of the innings saw Jonathan Carter being unfortunately run out for a mere single, as Zimbabwe managed to finish the thriller with a tie, as they grab a couple of points in their bag. 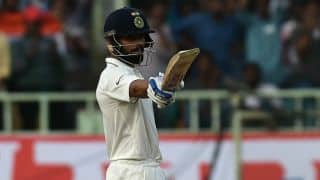