Shakib-al Hasan become 12th cricketer to have 4,000 runs and 150 wickets in ODIs

Shakib-al Hasan become 12th cricketer to have 4,000 runs and 150 wickets in ODIs

Shakib is the current number one ranked all-rounder in all formats.

Shakib-al Hasan became the 12th cricketer to score 4,000 runs and also to take 150 wickets in One-Day International (ODI) cricket. He is also the first Bangladesh cricketer to score 4,000 ODI runs. Bangladesh are playing their opening game of ICC Cricket World Cup 2015 against Afghanistan at Canberra. Shakib came into with with 3977 runs and during the course of his innings, he reached this milestone. Live Scorecard: Bangladesh vs Afghanistan

Amongst the other crickets who have achieved this unique milestone, there are quite a few big names. Former Australian skipper Mark Waugh tops it with 7569 runs and 195 wickets. Follwed by Carl Hooper of West Indies, who has 5761 runs and 193 wickets. The only Indian to feature in this prestigious list is Sachin Tendulkar. Sachin has 18426 runs and 154 wickets to his name. Shakib, the current number one ranked all-rounder in all formats is also the fifth Asian to have this record.  Live Updates: Bangladesh vs Afghanistan

Shakib and Mushfiqur combine to give momentum to the Bangladesh innings, What total do they need? #cwc15 #BanvAfg pic.twitter.com/RCVJQr3QnQ 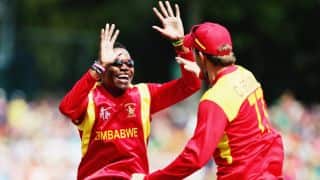