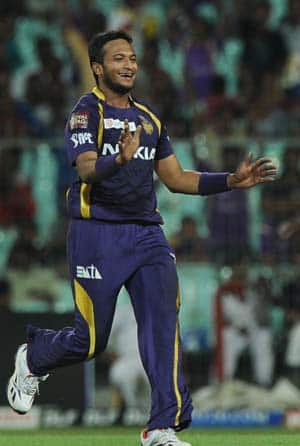 Opting to bat on a slow Eden strip, Royals made a cautious start before the skipper Rahul Dravid broke the shackles along with Ajinkya Rahane.

But the KKR slow bowlers with wrecker-in-chief Shakib (3 for 17) broke the 45-run opening partnership as the Royals found it difficult to break free.

Ashok Menaria (1) and Rahul Dravid (28) were also dismissed in quick succession as Royals were reduced to 49 for three in the ninth over.

Owais Shah was the top-scorer for Royals with 31 from 33 balls (3×4) as the former England batsman along with Shreevats Goswami put on 59 for the fourth wicket to repair the top-order damage.

There were only two sixes in the visitors innings, something that summed up the nature of the track. In what is seen as his last appearance at the majestic Eden Gardens, Dravid showed flashes of brilliance from his golden days.

He even came down the pitch on more than one occasion and hit Kallis on the rise during his delightful but short innings.

The old and young combination of Dravid and Rahane seemed in little trouble after a tentative start as they broke free in Narine’s first over, hitting the West Indian off-spinner for 10 runs.

Shakib claimed two of the three with his first spell reading 3-0-9-2 as the Royals batsmen found themselves foxed by the Bangladeshi left-arm spinner’s flight.

An elegant-looking Rahane got an outside edge from Shakib’s very first ball, while Dravid’s fine innings ended after he failed to keep the ball low to drive straight to Manoj Tiwary at short cover.

Bowling in tandem with Yusuf Pathan who executed a run-out at the other end, the duo did well to bring the run-rate down to under six-run per over.

Chief-wrecker Shakib returned with figures of 4-0-17-3, while Sunil Narine scalped one giving away just 22 runs from his quota.

Man of the match in their win against Team Bangalore in the previous match, Laxmipathy Balaji failed to open his account in this game but the veteran seamer did well save last over when he went for a few.