Mohammed Shami‘s improvement in his fitness levels has impressed Zaheer Khan with the former India fast bowler believing that the 29-year-old pacer’s dedication towards managing his body has repaid him well.

Shami’s career at one time was hampered by repeated injuries but in the last 12 months, he has shown tremendous refinement in managing his body and workload. In the news for off the field controversies, Shami’s newly-found hunger saw him pick up 14 wickets in the ICC World Cup in India’s run-up to the semi-final, which was followed by nine wickets from two Tests in the West Indies.

Former India strength and conditioning coach Shankar Basu had said in June that a fit Shami is his biggest achievement. In fact, the fast bowler did not miss a single Test during India’s last season having undergone a complete lifestyle overhaul and Zaheer lauded Shami for his terrific turnaround.

“With Shami we all knew about the wrist position and the upright seam. The only iffy thing was fitness but now he has worked on that,” Zaheer told Mumbai Mirror. “He has been phenomenal in terms of getting his fitness level up to the standard that is required.

“This has been a huge plus for him. Ability was always there. Just that some injuries had kept him out for a year. He has come back strongly. A lot of credit has to go to him for how he is managing himself and the hunger that he has shown to come back and play at the top level.”

Zaheer also appreciated Shami’s fellow pacer Jasprit Bumrah for adding a new weapon in his arsenal – the outswinger, which was used well recently during the West Indies series. Bumrah, from two matches, claimed 13 wickets at an average of 9.23, including a hat-trick in the second Test and the former speedster feels this will make him an even bigger threat.

“I have always said that if he had that outswinger for the right-handers, he will be a nightmare for the batting sides. I am glad that it has happened now,” Zaheer said. “He needs to work on his fitness and keep doing the things that have brought him this far. With experience he will keep getting better and better.”

If Bumrah and Shami impressed in Tests, another young pacer made noises in the limited-overs leg. Navdeep Saini, India’s reserve pacer during the World Cup, made his debut in the T20Is and picked up 3/17 at Lauderhill and was on a hat-trick. Yet to play an ODI, Saini has featured in only five T20Is fir India but given an opportunity, Zaheer feels Saini is tailor-made for Test cricket when the time is right.

“The longer format, that’s the format that suits Saini. Saini has got the pace and consistency in length,” he said. 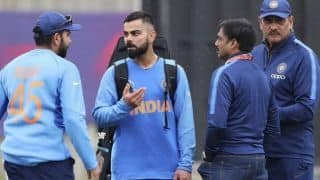