After a gruelling South Africa series, Jasprit Bumrah got a deserved break ahead of the Indian T20 League.

Shane Bond, Mumbai bowling coach, lauded Jasprit Bumrah’s rise in international cricket. From being a limited-overs specialist, Bumrah has emerged as one of the finest pacers across formats. Bumrah will play a crucial role in his team’s title defence in Indian T20 League

“He’s progressed massively, just three seasons ago he was still finding his feet in IPL, now he’s the number one bowler in T20s, ODIs and he’s been great in Tests as well,” Bond was quoted in a report from ANI.

Praising Bumrah, the bowler, the person, Bond added, “I think over the three years, everyone’s seen the skills he’s developed, he’s a fine all-round bowler across all formats, and like a lot of the others, he’s grown up as a person as well. All of a sudden now he’s the senior bowler in the team, although, for me, he’s still the same Jasprit I met three years ago, humble and hard-working.”

Bumrah’s progress coincided with the decline of Lasith Malinga. In the previous season, he had taken up the mantle of MI”s strike bowler from Malinga. However, it was Malinga who mentored Bumrah during the rise, helping him emerge as a force. In fact, Bumrah received BCCI’s A+ grade top contract last month.

After a gruelling South Africa series, Bumrah got a deserved break and the pacer is raring to start afresh.

“I am very happy to be back from my break. I bowled a lot of overs in South Africa, and have been playing continuously throughout the year. It was a good break and a necessary one. It wasn’t like I was sleeping at home, I was at NCA, training. The hunger is back and it feels good to be back,” said Bumrah.

Mumbai take on rivals Chennai in the Indian T20 League opener at Wankhede Stadium on Saturday. Bumrah shrugged off questions on the CSK threat and the responsibilities that comes as the lead bowler.

“I have played against Chennai before. It’s good to play against India teammates, although I will not be seeing this as a special challenge against a particular opponent.

“As a bowling unit, which we have a very one, we do not depend on one particular bowler, we have got many varieties in our line-up and as a unit, if we create pressure, the job’s done. I don’t think about all the responsibilities, I just enjoy whatever job I am given,” Bumrah added. 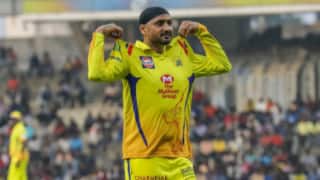