New Zealand have confirmed Shane Jurgensen as full-time bowling coach through to the ICC 2019 World Cup after employing him on an interim basis since February.

Melbourne: New Zealand have confirmed Shane Jurgensen as full-time bowling coach through to the ICC 2019 World Cup after employing the Australian on an interim basis since February. The former Bangladesh coach will have his second stint in the role, having been the Black Caps’ bowling coach from 2008-10. “Shane’s been impressive with the structure he’s brought to the bowling unit and we’re pleased to be able to lock him into a long-term contract,” head coach Mike Hesson said in a media release on Tuesday. “His knowledge of all conditions and his overall experience has been evident during his time with us.” New Zealand open their two-test series against Pakistan in Christchurch on Thursday.

Earlier, the India-New Zealand One-Day International (ODI) series was the highest-rated bilateral ODI cricket series in the last three years, principal broadcasters Star Sports announced on Monday. The ODI series against the Kiwis delivered 7,397 ( 000) average impressions on the network, surpassing last year s India-South Africa series which secured 6,153 ( 000) average impressions. The average impressions are measured in units of thousands 000. To complement its scale, the broadcast was bolstered by new look graphics and the best of experts on the commentary panel, cutting across demographic boundaries and capturing the imagination of a diverse fan base, reported IANS.

The India-NZ ODI series setting a new record benchmark as the highest-rated bilateral ODI series in the last three years further affirms that nothing is adored like quality cricket in this country, Star Sports CEO Nitin Kukreja said in a statement. 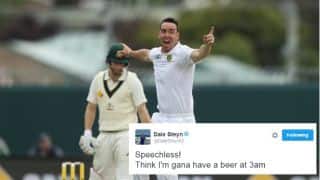