Warne and Valerie Fox got into an argument in a London nightclub that eventually led to the former allegedly hitting the latter.

According to a report published in DailyMail.UK, this incident took place in a posh London nightclub named Mayfair. Fox and Warne got into a verbal spat before the 30-year-old was allegedly punched on the face by Warner. Fox took to Twitter and posted a picture of her bruised face.

Proud of yourself? Hitting a woman? Vile creature. pic.twitter.com/RRnn3Ycfjp

She eventually lodged a police complain. The cops are understood to be investigating the incident, and whether CCTV cameras in nightclub captured footage of the alleged assault. The police gave out a statement, “Detectives are investigating an allegation of assault alleged to have taken place in a nightclub on Hertford Street in Westminster in the early hours of Saturday. There have been no arrests and inquiries continue.”

Fox posted another tweet, saying, “And no, I’m not lying. Just because you’re famous doesn’t mean you can hit women and get away with it.” 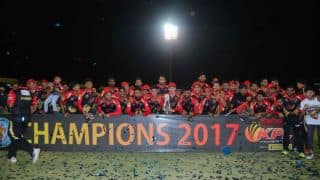