After months of speculations, Channel Seven has finally confirmed something. But what exactly is it and how is it related to Dhoni?

The headline may befuddle you. Shane Warne, the king of spin, the wizard with the red cherry in hand, the man once with the record for most Test wickets at 708, one of the all-time greats going the MS Dhoni way? Dhoni, the stumper from cricketing backwaters of India, Jharkhand, statistically the most successful Indian captain and one of the best finishers the game has ever seen. Can these two be bracketed together? In terms of discipline, no; one a legendary bowler, the other a terrific wicket-keeper batsman. This is why we said the headline may confuse you. But yes, Warne is indeed going the Dhoni way.

After months of speculations, it has finally been confirmed that Channel Seven will air a biopic on the life of the maverick Australian spinner. The series, titled Warnie , is currently under the planning and pre-production stage. At the moment, the star cast is getting finalised and once it is locked, the film series will be shot in Melbourne next year. It will focus on the life of Warne, one of the most controversial cricketers ever, and try to cover all the aspects of his personality. His admiration, criticism and even the controversies he has been a part of during his over a decade-and-a-half long career will be a part of the series.

The announcement in this regard was recently made at Channel Seven’s 2017 upfronts late on Wednesday. This is going to be huge, as no cricketer in recent times from outside India has planned a biopic on his life. While one on the life of former Indian captain Mohammad Azharuddin bombed after its release, as people claimed it was more of an attempt to redeem himself, the one on Dhoni s life struck gold at the box office. MS Dhoni: The Untold Story shattered records at the domestic office and is still going strong in many parts of the country.

For now, we will have to wait and find out what Warnie has to offer to its fans. The colourful character that he is, it will be interesting to see whether Warne goes for a genuine and elaborate account of his life or a highly manipulated one. 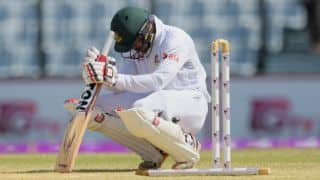 Give Bangladesh a chance, Test cricket