According to Warne, Paine should be in the Test team only if he is the best wicketkeeper-batsman in Australia.

Shane Warne has once again questioned the choice of Tim Paine as captain of the Australian Test team for the upcoming tour of the UAE, stating that the current world number three side has plenty of selection issues facing them as they prepare to face Pakistan in October.

According to Warne, who in May had been critical of the decision to appoint Paine as captain in the aftermath of the Newlands Test, Paine should be in the Test team only if he is the best wicketkeeper-batsman in Australia.

“The Australian way is always to pick your best team. There is a lot of talk about that, should Tim Paine be in the side? He is the captain at the moment,” he said. “But we, as Australians, should always pick our best team and then pick your captain and vice-captain from that. I don’t think we should just make a captain and then fit a side around him.

“I think the captain and vice-captain should still be up for grabs. I want us to see us pick the best side. If Tim Paine is in the best side and he is the best guy to be captain, then make him captain.

Paine, 33, made a surprise return to international cricket in November 2017 as wicketkeeper for the Ashes series at home, having last played Test cricket in 2010. A successful series earned him the wicketkeeper s role for the tour of South Africa, where the ball-tampering controversy erupted and saw Cricket Australia choose him as captain once Steve Smith and David Warner were banned for a year.

At the time, Paine had played 12 Tests but had the experience of being a state captain. In England this summer, Australia were beaten in all five ODIs under Paine.

Australia s next Test assignment is two Tests with Pakistan followed by home Tests against India and Sri Lanka either side of the new year. According to Warne, the man to lead Australia in Tests was the country s most successful finger spinner and veteran of 78 matches, Nathan Lyon.

“I would like to see Nathan Lyon be considered for the vice-captain role. He is a senior player, an experienced player in the side – spinners generally think about the game pretty well,” Warne said on Fox Sports.”Nathan Lyon thinks about the game pretty well, even the big ‘quickies’ do, in [Mitchell] Starc and [Josh] Hazlewood. [Pat] Cummins is young but why not look at him, either? 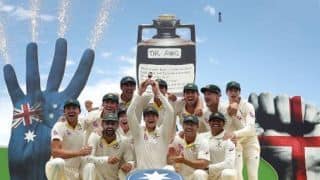