Shane Watson and Ajinkya Rahane registered record opening partnership during the Rajasthan Royals vs Chennai Super Kings (CSK) in Match 15 of Indian Premier League (IPL) 2015 at Ahmedabad on Sunday. Earlier, Graeme Smith and Naman Ojha against Kings XI Punjab. RR were 138 for the loss of no wicket after 15 overs, with Rahane on 66 not out and Watson was on 71 not out. Live Scorecard: Kings XI Punjab (KXIP) vs Kolkata Knight Riders (KKR) IPL 2015 Match 14

Earlier, Ajinkya Rahane and Shane Watson got Rajasthan Royals (RR) off to a terrific start. Rahane was the aggressor early on, but once Watson got his eye in he was unstoppable as well. Watson, on IPL comeback, scored a superb half-century while Rahane got to his landmark soon after.

Dwayne Bravo played more or less a lone hand, scoring a 29-ball half-century that took CSK to a reasonable total. Dwayne Smith and Brendon McCullum started well, but soon McCullum, Suresh Raina, and Faf du Plessis were dismissed to leave CSK reeling at 39 for three. When Smith was out for 40, CSK were left battling for survival at 65 for four. Live Updates: Kings XI Punjab (KXIP) vs Kolkata Knight Riders (KKR) IPL 2015 Match 14

That united Bravo and MS Dhoni, who proceeded to play with caution initially before opening up brilliantly. Both men brought out the big hits toward the end of the innings, with Bravo scoring a 29-ball 50. Dhoni did not quite get going, failing to make good enough connection despite swinging hard. Indian Premier League (IPL) 2015: Complete coverage 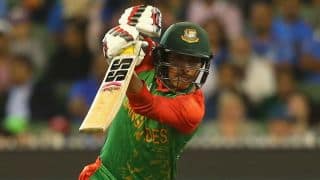