Shane Watson as good as anyone else in world cricket: Allan Border

Shane Watson as good as anyone else in world cricket: Allan Border

Former skipper Allan Border on Monday praised Australia batsman Shane Watson and said that on his day, he can be as good a batsman as anyone else. 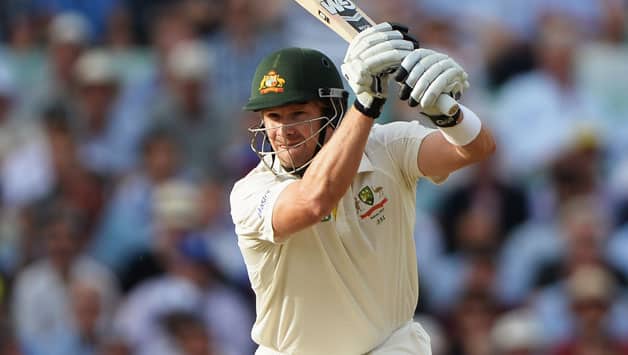 After a poor of form in the series, Shane Watson finally managed to hit a ton in the final match of the recently-concluded Ashes series © Getty Images

Former skipper Allan Border on Monday praised Australia batsman Shane Watson and said that on his day, he can be as good a batsman as anyone else.

“Shane Watson finally delivered what he’s been promising for quite some time. When Shane is in a mood like that he’s as good as anyone in the world,” Border wrote in cricket.com.au

Border was also impressed by Steven Smith after his maiden Test ton in the fifth Test.

“Steve Smith, played a truly wonderful innings. We were all hoping one of the young guys would come through and make a score and Steve has done that. His batting, more-than-handy leg spin and excellent fielding make him a terrific player for Australia. Then you throw in his leadership skills, something we need from a young player, and he’s the complete package. He gets a big tick from me,” Border said.

Talking about the umpires decision to call off the match due to poor light in the final Test, Border said, “One of my biggest pet hates in cricket is the bad light rule. There were only four overs left in the day’s play when the umpires called time. I mean, let them play it out. This is an area where we can tighten the game up from scenarios just like this.”

Border added, “I know they have to be seen to be fair, following the precedent they set in Manchester and then following it through to here. I’m not sure what scale they use, but if the umpires come off when the meter reads 4/10, then I think they have to come off when it’s 2/10. From personal experience I never came from the ground because I couldn’t see the ball. I’d go as far as saying that 99% of players past and present only come off for tactical reasons, not because they can’t see it. And that being the case what is the light rule for?”

Zimbabwe look to strenghten all departments to beat Pakistan