Rajasthan Royals all-rounder Shane Watson on Tuesday said he is gertting close to regain full fitness in order to bowl in the Indian Premier League (IPL). 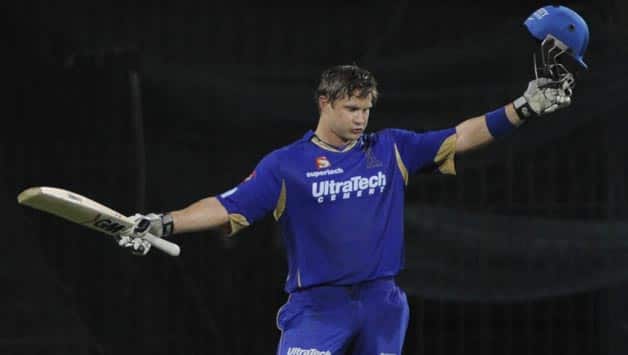 Rajasthan Royals all-rounder Shane Watson on Tuesday said he is gertting close to regain full fitness in order to bowl in the Indian Premier League (IPL).

Watson, who struck 101 against Super Kings on Monday night, said it will take two more games for him to return to full fitness for bowling.

For the first time this year, Watson bowled against Royal Challengers Bangalore, Saturday, and then against Chennai Super Kings after a series of injuries, the latest being calf muscle injury.

“It’s certainly something that I’ve missed in the last three months. It will probably take me another two games to fully find my feet and bowl exactly how I want to,” Watson told IPLT20.com.

“I’m getting closer to being 100 per cent. A couple of more training sessions and games and my body will be absolutely ready to handle the rigours of bowling. It is holding up well generally but now it’s just the matter of it getting used to bowling again,” he said.

Watson, who recently stepped down as the Australian vice-captain from all the three formats, said he has put in a lot of hardwork and hoped to reap rewards in the coming 10 months.

“On the whole I feel as good as I ever have. I’ve put in a lot of hard work during this period and hopefully, will reap the rewards for the coming 10 months or so. I was half-capacity without my bowling. It feels great to be bowling once again,” he said.

Watson was all praise for his compatriot Mike Hussey’s match-winning innings despite the fact that his century went in vain.

“Any time you watch Michael Hussey bat, it’s a pleasure. To be able to see how much in control he is throughout the innings; it looks like he’s not taking any risks throughout his innings. We’re certainly going to miss him in the Australian team. One, he’s a great man but also the quality of his skills is amazing. Unfortunately he’s on the wrong side here but to watch him bat is always a great pleasure,” he said.

Watson admitted that Twenty20 is all about a little bit of luck.

“In T20 you need a little luck as well to get your innings going. Unfortunately we weren’t able to finish well. It was an important game for us and we knew how crucial it was for us to be playing well against CSK.

“I think 185 are a lot of runs on any ground. At the beginning of the match our mindset was probably 160-170 and we ended up with an above-par score. I thought Stuart Binny [36 off 22] was brilliant in the latter part of the innings to give us a further kick. We batted really well as a unit,” he said.