Karun Nair and Stuart Binny were unable to get the big shots against the CSK bowlers.

Karun Nair and Stuart Binny were unable to get the big hits for Rajasthan Royals against Chennai Super Kings in their IPL 2014 match. Samuel Badree bowled the 15th over. After being hit for a six by Binny, he came back strongly to dismiss Karun Nair off the final delivery of the over.

Ishwar Pandey came back for his third over. Karun and Binny took a  couple of single off the first two balls. The third ball was a dot, and off the fourth delivery Binny took a quick single. The batsmen were unable to get the big hits in the over, and ended up scoring only five runs off the over.

Mohit Sharma came in to bowl the 13th over, and started well with a couple of dot balls, but Watson hit a big six off the third ball to get to his half century. Mohit came back brilliantly to get in a yorker that took out Watson’s middle stump. Stuart Binny came in at No 5 and nearly edged one back on to his stumps off the last ball of the over. They managed to take three off it to bring up the 100 for RR.

Earlier, Shane Watson was looking solid for Rajasthan Royals against Chennai Super Kings in their IPL 2014 match. Ravi Ashwin came on to bowl the 12th over, and was unable to stem the flow of runs once again. He conceded seven runs off the over, but bowled wide and did not look penetrative.

Vijay Shankar, playing his first game, came on for the tenth over. After conceding just one of the first two deliveries, Shankar was hit for a boundary by Shane Watson. He was then smashed for six off the fifth ball, again by Watson. The final delivery was hit for another six, as Watson took 19 runs off the over. Rajasthan raced to 84 for one after 10 overs.Catch Live Blog of the Chennai Super Kings (CSK) vs Rajasthan Royals (RR), IPL 2014 match here

The powerplay had gone for 42 and then Dhoni got back Ishwar Pandey into the attack. Later, Ravichandran Ashwin came on for the eighth over and he was swept through fine leg for four by Watson. There were a few wides in that over. Catch the Live Scorecard of Chennai Super Kings (CSK) vs Rajasthan Royals (RR) , IPL 2014 match here 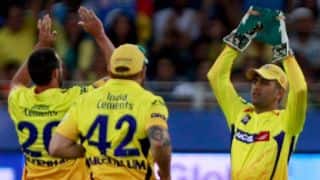