Shane Watson may have retired after the Ashes earlier this year, but he looks forward to play the short formats in the coming ages and has set his sight for the ICC World Twenty20 (T20) to be held in India in 2016. Watson who recovered from his calf in jury in October, has not been at his best at the Bog Bash League (BBL) for his team Sydney Thunder. He has just managed to score 10 runs so far in the league. “The hitting at the moment is a little bit off but I’ve been working on a few things just to get my batting back to where I know it can get to,” Watson told AAP on Wednesday, as reported on CricBuzz. ALSO READ: Michael Clarke’s comments on John Buchanan incredibly harsh: Shane Watson

“I feel like the ball’s coming out well in my bowling. I’m one innings away from being able to contribute really well with the bat as well.” Next year’s showpiece event in India is at the forefront of Watson’s agenda. The former Australian all-rounder has enjoyed resounding success in the past in the shortest format in the sub continent and remains hopeful of replicating his form as Australia look to grab this opportunity of winning the ICC T20 2016. “There’s no doubt the Twenty20 World Cup I’ve had in the past, and during the (Indian Premier League), I’ve had quite a bit of success over there,” he said. “I know the conditions very well. I just need to get back to my best, and I know what I can bring to the team when I’m there.” ALSO READ: Shane Watson set to appear in Pakistan Super League (PSL)

Watson also received a vote of confidence in his quest to return to the national side from Michael Hussey, the Thunder captain, who is slated to travel to India in his role as the team’s batting consultant. “I know a lot of bowlers from around the world fear him from playing against him over there,” Hussey said. “They have a lot of respect for Shane Watson. Particularly, when he’s going well, there’s no ground big enough. He’s got so much power so he’s hard to stop.” 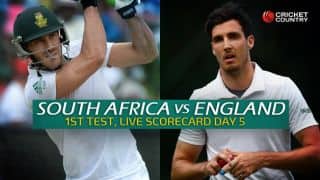