Shane Watson hit a century on his return from injury and Phil Hughes cracked 86 as Australia scored a daunting 329 for seven in the third one-day international against the West Indies in Canberra. 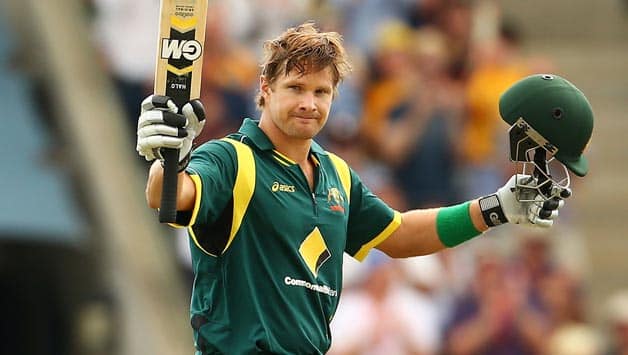 Shane Watson hit a century on his return from injury and Phil Hughes cracked 86 as Australia scored a daunting 329 for seven in the third One-Day International against the West Indies in Canberra.

Watson, opening the innings after five weeks out with a calf injury, smashed 122 off 111 balls in a welcome return to form before this month’s four-Test tour to India.

He reached his seventh ODI century off 102 balls and then set about Kemar Roach, clubbing a huge six logged at 114 metres (374 feet) into the stands, followed by a four as he threatened to go on for a big ton at the Manuka Oval.

But Watson holed out to Kieron Pollard — one of four catches to the athletic West Indian — two balls later, top-edging to deep backward square leg as he went after Roach’s second-last ball of his eighth over.

Hughes, who gave a chance cutting through slip on six, threw away the opportunity to make his third ODI century this season when he was caught behind off Sammy for 86.

Wicketkeeper Devon Thomas had taken a painful blow on his thumb the previous delivery but he held the catch while standing up to the stumps to medium-pacer Sammy.

Hughes scored his runs off 93 balls with 10 fours and a six and departed with less than five overs left in the innings.

The Australians, chasing a series victory after winning the opening two ODIs in Perth, lost a flurry of late wickets as they tried to accelerate the scoring on the bat-friendly pitch.

Opener Aaron Finch, who was fortunate not be caught off a leading edge on 20, was out when he tried to run a Sammy delivery down to third man only to be caught behind for 38 off 41 balls.

Finch helped put on 89 for the opening wicket with Watson and missed a great opportunity to cash in.

Skipper Michael Clarke was out to a juggling caught and bowled by Pollard for 15 in the 41st over as the Australians, who won the toss, went after a 300-plus total.

Glenn Maxwell left the wicket shaking his head in disbelief when he was brilliantly caught one handed for four by a leaping Pollard on the boundary as he looked to smash spinner Sunil Narine for six.

Pollard plucked another near-replica one-handed leaping catch on the rope to end George Bailey’s cameo of 44 off 22 balls and give Narine his second wicket.

James Faulkner only lasted three balls before he was bowled for two.