RR are 47 for three after six overs.

In Indian Premier League (IPL) 2014 game played between Rajasthan Royals and Mumbai Indians, Unmukt Chand got out early in the piece. However, both Karun Nair, the youngster and Shane Watson, the skipper steadied the innings. Nair played with deft placement to collect a few boundaries.  On the other end of the spectrum, Watson played a crackerjack square cut off Kieron Pollard for a boundary. Watson though, got out to Pragyan Ojha. Even Sanju Samson lost his wicket to Krishmar Santokie, the medium pacer.

Earlier, Jasprit Bumrah opened the bowling for Mumbai. Santokie, known for bowling with variations bowled the second over of the game. The left-armer bowled with decent variations for Mumbai. It was then Karun, who opened his shoulders to smash Santokie for a six. He also smashed Santokie for a boundary. However, his partner Chand was caught in the deep by Hussey off the bowling of Ojha, the slow left-arm orthodox. Shane Watson came into bat at No 3 position.

Both Michael Hussey and Lendl Simmons erected a solid platform for Mumbai Indians to setup a large edifice against Rajasthan Royals in Indian Premier League (IPL) 2014 at Ahmadabad. In the end, they ended up with 178 for the loss of three wickets on the board. It was Simmons, who first opened up his shoulders by essaying fine shots.

It was then, Hussey who took over by collecting a few boundaries. The way he rocked onto the back-foot to smash a six off Rajat Bhatia showcased his class. Hussey also played a fine slog sweep to thwack Ankit Sharma for a majestic six. Pollard and Rohit Sharma too played well. 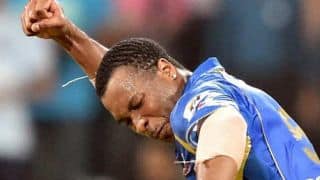