Shane Watson scored a magnificent half-century on his way to this feat.

Shane Watson reaches scores 4,000 in T20s during match between Rajasthan Royals (RR) and Kolkata Knight Riders (KKR) in Match 54 of the Indian Premier League (IPL) at Brabourne Stadium in Mumbai. Watson was looking in prime touch during his innings as he looked to punish the KKR bowlers. Ajinkya Rahane and him built a solid partnership before Rahane was unfortunately run out.

This is a crucial match for both teams as the winner of this match will guarantee a place in the playoffs. RR skipper Steven Smith had earlier won the toss and elected to bat first in this all crucial match and had no hesitation to bat first. RR had an excellent beginning to the IPL 2015 but they stumbled along the way and have a golden opportunity to make it to the playoffs from here.

Shane Watson relinquished RR captaincy earlier in the tournament to concentrate on his batting and by the looks of it, it is paying off. 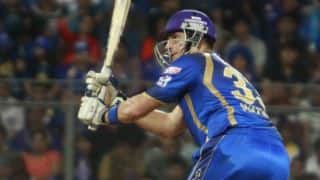