Watson had arrived in Australia ahead of the birth of his second child from the West Indies.

Australian cricketer Shane Watson on Wednesday shared the photo of his second child, Matilda Victoria Watson on the micro-blogging website Twitter. Watson and his wife Lee Furlong were blessed with a baby girl on Sunday, May 24.

Matilda is the two-year younger sister to Will, who was born on March 14, 2013. Watson had arrived in Australia ahead of the birth of his second child, as he was busy with the national side with its preparation for Test series in the West Indies.

There are no words to describe the love we have for our gorgeous little girl. Meet Matilda Victoria Watson. pic.twitter.com/3pPNVYesNe

On his arrival from the West Indies, the Australian all-rounder had expressed his gladness for being home on time.

Home in the nick of time to see my beautiful baby girl, Matilda Victoria Watson, enter the world. Mum and Bub are flying #explosionoflove 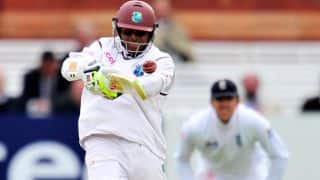