Shane Watson said on Friday he will be given the first chance to fill the vacancy in Australia's batting order left by Ricky Ponting's retirement and bat at number four in next week's first Test against Sri Lanka. 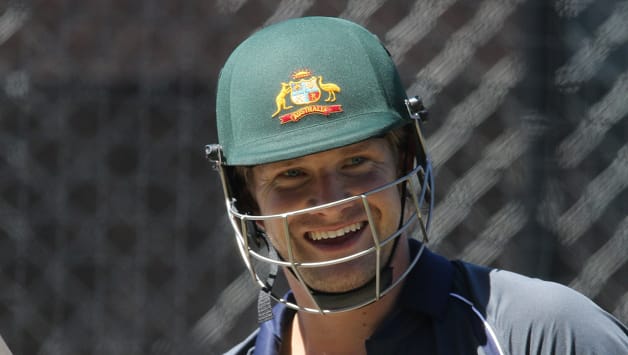 Shane Watson said on Friday he will be given the first chance to fill the vacancy in Australia’s batting order left by Ricky Ponting‘s retirement and bat at number four in next week’s first Test against Sri Lanka.

Recalled Phillip Hughes is expected to bat at first drop in a re-jigged Australian top order for the Hobart Test, starting next Friday.

On the same day skipper Michael Clarke, speaking to reporters in Sydney, suggested the Test batting line-up was still undecided, vice-captain Watson confirmed in Brisbane that he would drop down one spot to number four in the Australian order.

“(Coach) Mickey Arthur talked to me at the end of the last Test to say the way it was looking, they were going to move me down to four,” Watson told reporters.

“It’s taken me a few days to get my head around that, but it means I can bowl a few more overs.

“In the last Test match, I know Michael (Clarke) in the second innings was a bit hesitant to bowl me a few times towards the latter part of their innings, just to give me the chance to be as fresh as I could going into bat.

“The ultimate is to be able to contribute with both bat and ball throughout the whole Test match and not be held back.

“Batting at four will give me that extra time to freshen up.”

In contrast, Clarke said the top order had yet to be finalised and that he was open to a move up the order.

“I’ll speak to Mickey Arthur about that when we get into camp in Hobart,” Clarke said.

“As for where I bat, the number I bat doesn’t bother me. It’s about fitting in with what’s best for the team.”

Hard-hitting batsman David Warner, one of four openers in Australia’s new-look top six, said moving Watson to number four would be the optimal outcome for the Test side.

“As Shane said, (it would be great) if we can get the most out of him bowling. It’s going to be fantastic for him to get that little extra rest,” Warner said.

“Me and Ed (Cowan) are in a good space at the moment. They’ve told us where we’re at,” the 26-year-old added when asked whether Arthur had assured him Australia‘s opening partnership won’t change.

“We always look forward to batting with each other, and we’re playing down in Hobart which is Ed’s home ground.”